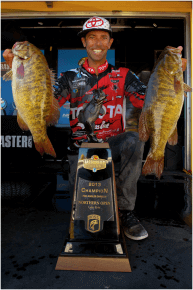 In his last best chance at qualifying for the 2014 Bassmaster Classic, Elite Series pro Mike Iaconelli capitalized in a big way as he sacked 24-9 today on Lake Erie, giving him a two-day total of 48-8, nearly four pounds better than runner-up and Erie ringer Joe Balog.

“It’s not real, man. It’s not real,” Iaconelli said in disbelief of his first Bass Pro Shops Bassmaster Open win. “When these moments happen, it’s magical. I remember all my wins from club tournaments to this one, and they’re all special.

“It’s been a weird year. I had a bad year on the Elite trail, and I had a lot of downs, and I just kept my head in it and kept working, and it turned around finally.”

This win punctuates six weeks that the New Jersey pro has been on the road and signifies the removal of a giant weight from his shoulders.

“There was so much pressure coming in here, and more than once I had a feeling like I should give up because so much wasn’t going right. It really wears on you when you’re out here by yourself and not doing good, and there were moments where I wanted to turn back and go home,” Iaconelli said. “That’s the thing about fishing and life in general; you just keep pushing, and these things happen when you least expect them to. They’re magical things.

During the two-day tournament, shortened by a weather cancellation Friday, Iaconelli relied on a one-two punch for Erie’s smallmouth. Eighty percent of his fish fell for a drop shot rig comprised of a 3/8-ounce VMC pencil drop shot weight below a 1/0 VMC wacky rig hook of his own design holding a Berkley Havoc Flat Dawg, also of his own creation.

“That bait is designed to be a shallow water stickbait, but in practice I found it’s a killer drop shot bait,” he said. His best color was watermelon silver/red. When the fish weren’t eating the drop shot, he threw a Rapala DT-14 crankbait, especially when the lake was flat. He targeted the tops of the humps when the fish moved higher in the water column. The color he used was smash.

With this win, Iaconelli has seen success at every level of B.A.S.S. competition from the B.A.S.S. Nation to the Elite Series and Classic, as well as a Toyota Bassmaster Angler of the Year win. “This trophy is going right next to my AOY and Classic trophies; it means just as much,” he said.

Behind Iaconelli was Joe Balog of Michigan, who caught 23-4 on Day 2, which gave him a two-day total of 44-10. CJ Shaver of Ohio and Dave Lefebre of Pennsylvania tied for third with 44-2 each. In fifth place was Hunter Shryock of Ohio with 43-8. 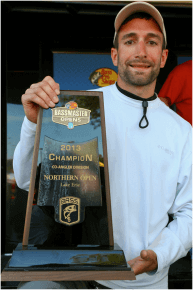 On the co-angler side, Paul Marchaza of Ohio caught an astounding 15-0 from this three-fish limit, giving him a two-day total of 28-9. Marchaza was nearly at a loss for words following his win.

“This is unbelievable. I never, ever dreamed this could happen,” the 30 year old said. “I put in a lot of hard work and studying; I’ve never even dragged a tube on Lake Erie. Jamie Caldwell took me out the first day and settled my nerves and showed me what to do, and that settled me down for today. I didn’t catch a fish for the first four hours of the day today, then we went out deep, and I caught them all drop shotting.”

For his win, he took home a new Triton boat with a 115-horsepower Yamaha outboard.

In second place on the co-angler side is Mike Fedio of Michigan with 27-7; in third is Gary Walker of Massachusetts with 25-7; in fourth is Nick Habuda of Canada with 25-3; and in fifth place is  of Ohio with 25-0.

The Carhartt Big Bass award for $500 for the largest single bass caught at the tournament was awarded to Jams McMullen of Pennsylvania for his 6-6 on the pro side, while Ohio’s Terry won the award on the co-angler side for his 6-8.

The Luck-E-Strike Heavyweight was awarded to Iaconelli on the pro side and Marchaza on the co-angler side for catching the biggest bag in their respective divisions. Each received a $250 Bass Pro Shops gift card.

The Livingston Lures Leader award of $250 was presented to Iaconelli, the pro angler in the lead on Day 2. Marchaza, the leader on the Day 2 co-angler side, received a Livingston Lures gift pack valued at $250.

BIG PARTY on the California Delta!