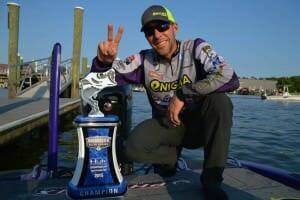 Following a season in which he rewrote the Bassmaster Elite Series Angler of the Year record books and racked up wins on opposite ends of the country amassing almost $300,000 this year alone, Team Mercury pro Aaron Martens – who last week secured his third Elite Series AOY award – struggles to sum up a seven-month performance that goes into the books as one of the most dominating in the 37-year history of B.A.S.S. competition.

“This season has been … gosh, it’s really hard to describe,” Martens admits.

Martens locked up his third AOY title with a sixth-place finish Aug. 30 on Lake St. Clair, Michigan, at the regular-season finale of the 2015 Elite schedule. After eight 2015 tournaments, Martens’ AOY points total (703) gave him such a lead over his closest competitor (Dean Rojas, with 601 points) that it’s mathematically impossible for Rojas – or anyone else – to catch him, regardless of the results at the Toyota Angler of the Year Championship, Sept. 17-20 in Sturgeon Bay, Wisconsin.

“That’s like the Yankees being so good that they give them the World Series trophy before they even play the World Series,” said Martens’ Mercury teammate, Jacob Powroznik. “Aaron has just been that good this year.”

Starting off strong at the Sabine
There’s one tournament that Martens refers to repeatedly when talking about his recent Elite Series seasons: the 2013 season opener on the Sabine River in southeast Texas, a tournament in which Martens finished a dismal 85th (his third-lowest finish in 10 years). Even though Martens pulled off a Herculean comeback to win the 2013 AOY title, he has grown to think of the Sabine as his nemesis. Consequently, when the 2015 Elite season kicked off on the Sabine in March, Martens was noticeably determined to exorcise the ghost of 2013.

He did that in emphatic fashion, pushing his 250 Mercury OptiMax Pro XS to the limit through three brutal practice days on the sprawling river system, and then pushing it even harder through hundreds of miles up and down the treacherously flooding system through the four-day tournament. Martens weighed in 44 pounds, 8 ounces and finished third on the Sabine, his highest season-opening finish since the 2001 Bassmaster Top 150.

“I wasn’t very gentle with my OptiMax that week,” Martens jokes. “The Sabine is just a tough place to fish because of the distances you run and the water conditions you have to get through. Especially when it’s flooding like it was this year. It’s not a place where you can be timid, and it’s brutal on your gear. I never worried about my motor for a second, though; I just focused on doing well at that tournament.”

Kicking into gear on the West Coast
Martens followed his Sabine River success with a disappointing 66th-place finish at Lake Guntersville, a performance that had him especially anxious to return to his California roots for the next two tournaments (on the Sacramento River/California Delta and on Lake Havasu). Martens has enjoyed tremendous success on both of those fisheries throughout his career, notching multiple Top 5 finishes on each, so when he blasted off from Discovery Park for Day 1 on the Sacramento and pointed his Pro XS-powered Phoenix downriver toward the California Delta, he knew he was in for a long week of 90-minute one-way runs to get to his best water, and a bone-jarring test of his motor brackets on the weekend, when the entire Sacramento River waterway became jammed with pleasure-boat traffic.

“The Sacramento River is one of the worst roller-coaster rides you’ll ever go on,” Martens says. “It’s a long run to begin with, but once you get to Friday, Saturday and Sunday and it’s 95 degrees in the Sacramento Valley, everybody who owns a boat is out on the river. The boat wakes are brutal. If you want to do well in a tournament here, though, you have to commit to fishing way down in the Delta, and that means you have to depend on your motor’s durability to get you there and back. That’s the biggest reason why I run a Mercury 250 OptiMax Pro XS.”

Martens eventually weighed in 80.7 pounds to finish second on the Sacramento, and then backed that up a week later with 68.9 pounds and another win on Lake Havasu, the seventh victory and 65th top-10 finish in his B.A.S.S. career.

“You don’t beat your gear up on Havasu the same way you would on the Delta, but you’re still out there fishing and running for seven days in 102-degree heat,” Martens says. “That’s not easy on you as a person, and it’s not easy on your motor. The 250 Mercury OptiMax Pro XS just handles the conditions, no matter where we are.”

Making the most of the stretch drive
Martens maintained momentum from his dominating West Coast swing with top-20 finishes in his next two events (13th at Zippo BASSfest at Kentucky Lake; 15th at the Evan Williams Bourbon Elite at St. Lawrence River), squeezing past Dean Rojas and Justin Lucas and entering the Huk Performance Fishing Elite at Chesapeake Bay with an 11-point lead in the AOY standings.

Martens wasted little time in establishing himself as the angler to beat on the Chesapeake, committing to the longest run in the 107-man field – roughly 40 miles each way through heavy late-summer boat traffic – and bringing 17.8 pounds to the scales on Day 1. He followed that up with 15.0 and 16.5 on Days 2 and 3, respectively, and then blew the doors off Championship Sunday with 21.5 (the heaviest bag of the tournament) for the wire-to-wire win.

“There aren’t that many places on Chesapeake Bay where you can count on the quality of fish to be consistent for four days this time of the year, but I knew I had the right fish,” Martens said. “Parts of that system remind me of the Miracle Mile in Detroit: the further down you go and the closer you get to Baltimore, the more you get bounced around by boat wakes from giant yachts. Plus, there are miles and miles of crab pots that you have to navigate through. If you ever want to run a test of a 250 Mercury OptiMax Pro XS, that’s the place to do it.”

Locking up the AOY on St. Clair
Martens’ Chesapeake win extended his AOY cushion to more than 50 points entering the Plano Elite on St. Clair, a monumental gap regardless of the outcome at St. Clair. Martens started off well enough, weighing 18.5 pounds of St. Clair smallmouth on Day 1 to settle into 24th place, but by the time he came to the scales on Championship Sunday at St. Clair Metropark and weighed in for his final total of 75.7 (sixth place), Martens had mathematically secured his third Angler of the Year trophy, which he’ll receive Sept. 20 at the AOY Championship in Wisconsin.

“I guess the best way for me to describe this season is ‘incredible’,” Martens said. “To be able to put yourself in contention to win an Elite Series tournament – to make a Top 12 – is a major accomplishment. It’s really hard to do that. To do that several times a season and give yourself a chance to win an Angler of the Year is 100 times harder than that. I can’t even believe that this season is over, everything happened so fast. But it’s been an amazing year, one I’ll never forget.”

NOTES: Martens’ previous AOY titles came in 2005 and 2013 … Martens’ tournament winnings of $286,500 this season pushed his career B.A.S.S. earnings to $2.53 million, fourth place on the all-time list (Mercury pros Kevin VanDam and Skeet Reese are first and second, respectively) … Martens’ performance at Lake St. Clair moved him into the No. 1 spot on the BassFan.com World Rankings for the first time in his career … Martens is one of seven Mercury pros in the Top 10 standings entering the AOY Championship (Powroznik, Edwin Evers, Brent Ehrler, Skeet Reese, Bernie Schultz and Greg Hackney are the others).

Lew’s gets a change of address

Carl Jocumsen Gets Hooked by Hayabusa