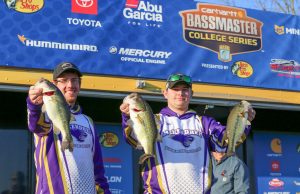 CULLMAN, Ala. — Despite weighing in just three fish on Day 3 of the Carhartt Bassmaster College Series at Smith Lake presented by Bass Pro Shops, Ethan Jones and Andrew Althoff secured the wire-to-wire victory with a 9-pound, 5-ounce bag that pushed their three-day total to 47-4.

Jones and Althoff ended the day with an 8-pound advantage over the second-place team of Braden Perry and Aidan England from Carson-Newman University, who weighed in 14-13 on the campus of Wallace State College on the final day for a three-day total of 39-5.

It is the second wire-to-wire victory on the College Series this season, after Cody Huff and Dakota Pierce of Bethel University completed the three-day sweep at Toledo Bend Reservoir in Louisiana.

“I’m a mess of emotions right now. Overjoyed obviously,” Althoff, a senior, said. “This is by far the best finish I’ve ever had in a college event. I’m also relieved because we had a big lead coming into today and we had a slow start in the morning.”

Unlike Days 1 and 2, Championship Saturday started extremely slow for Jones and Althoff as the water in their primary area dropped several feet overnight and continued to fall throughout the day. 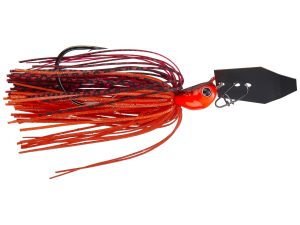 About midmorning, Jones and Althoff moved to their secondary area, a location where they had lost two good fish on previous days, switched from a red Z-Man Jack Hammer ChatterBait to flipping baits, and Althoff landed a 2-pound fish to break the lull.

“I pitched a (Strike King) Falcon Lake Rage Craw into this bush and felt a tap and I set the hook. We swung him in the boat and fished down the bank and didn’t get any more bites,” Althoff said.

Knowing they needed to slow down, the duo returned to their primary spot and caught the second bass of the day, but could not coax another one from that area. They returned to where they caught the first fish and Jones hooked one close to 4 pounds.

“That fish was an adventure,” Althoff said. “That fish jumped 4 feet in the air. I was stumbling around the boat trying to get the net. But we got it in the boat and that was that.”

While the majority of the field targeted the famed spotted bass Smith is known for, Althoff and Jones caught almost exclusively largemouth bass and entered Day 3 with a 10-pound advantage over the Top 12.

Their primary area was what Jones described as a flooded park in a small cut with standing timber located not far from the boat ramp. The duo could see the boat ramp while they were fishing, and most of the fish they caught came out of 8 to 12 feet of water.

When the tournament began, Smith Lake was several feet above summer pool, and Jones added the bass they caught were not in prespawn mode, but rather adjusting to a rapid rise in water from several weeks of heavy rainfall.

By Day 3, the water had dropped out of the spot where they caught most of their fish. Jones said he still knew fish could be there, but they relied mostly on their secondary location, which had a lot of brush but not as much standing timber.

Perry and England caught the heaviest bag of the day and jumped from 10th place to second place.

During weigh-in, the Carson-Newman duo sat on the hot seat through eight teams before relinquishing the lead to McKendree, but Perry said they were blessed to be in that position after a tough practice.

“We were blessed because we found one little area the first day of the tournament that we ended up catching 10 of our 15 keepers out of. It just happened to be all good ones in there,” he said. “We just put our heads down today and caught as much as we could.”

Perry said during practice, he and England were fishing fast. But on the last day before competition began, they slowed down and caught a couple of keeper spotted bass on a Z-Man Big TRD Ned rig and a 2.8 Keitech swimbait in 25 to 30 feet of water.

Brian Linder and Nathan Thompson of Minnesota State Mankato held steady in third place with a three-day total of 25-15. Linder and Thompson took advantage of one key area and caught a limit of spotted bass each day.

The Top 10 teams qualified for the Carhartt Bassmaster College Classic presented by Bass Pro Shops on March 8. The teams will compete on Lay Lake in a one-day exhibition and then weigh in on stage at the Academy Sports + Outdoors Bassmaster presented by Huk in Birmingham prior to the Classic weigh-in.

All high school and junior teams will take-off at 6:30 a.m. CT from Smith Lake Park. The weigh-in will begin at 1:30 p.m. for the juniors with the high school anglers to follow at 2:30.

The tournament is being hosted by the Cullman Area Chamber of Commerce.