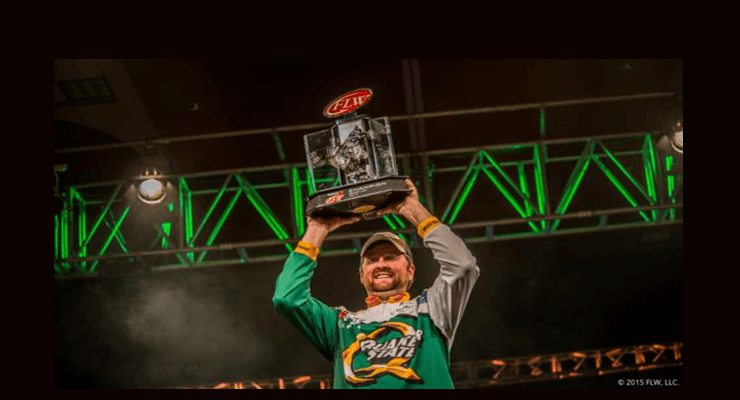 In Matt Arey’s bio, he lists Beaver Lake as his favorite lake in the country. Many have assumed this was some kind of joke or mistake. But it’s not. Beaver Lake really is Arey’s favorite lake, and today the Quaker State pro proved why, winning his second Walmart FLW Tour title on Beaver Lake in a row.

Arey saved the best for last, weighing in the biggest limit of the tournament – 17 pounds, 13 ounces – on the final day to win by nearly 6 pounds over Tracy Adams. Arey’s four-day total was 55-06, and his winning margin was substantial on such a challenging lake.

“It’s been an unreal week,” says Arey, who pocketed $125,000 for his win. “Stuff happened today that never happens; it’s been a day I’ll never forget.

“I love this lake. I really do,” he continues. “No, it doesn’t have the biggest fish in the world in it, but it’s an awesome pattern lake with an incredible amount of diversity. It suits the way I like to fish, hopping around trying to get something going, looking for little windows and patterns that might only last a day or just a few hours, and then it completely changes the next day.”

The only thing constant about Beaver Lake is that it’s never constant, and that’s what Arey loves the most about it. Over the years he has proven his knack for dialing in the many varying patterns that can be found on the northwest Arkansas impoundment. He has had success on Beaver in flooded conditions with spinnerbaits, in low-water conditions with crankbaits and in prespawn with a jerkbait. And last year he won the event with a jig.

“To me it’s a different lake every year we come here,” Arey says. “You can’t fish this place on memories. Every year that I’ve done well here it has been on a completely different lure.”

All week long Arey employed a one-two punch that involved a 5-inch hand-poured swimbait and a wacky-rigged Lunkerhunt Lunker Stick. He covered water quickly with the swimbait in the stained, river section of the lake, targeting laydown logs, docks, bushes and even windblown points, trying to get fish to reveal their whereabouts. Half the time the fish would commit to the swimbait and eat it; other times the fish would rush the swimbait and turn away, giving away its presence. If a fish missed, Arey would then Power-Pole down, pick up the wacky rig, skip it back to where the fish came from and catch it on the follow-up.

“I think the ones that would just chase the swimbait and not eat it were actually spawning and guarding beds,” Arey says. “Putting that Lunker Stick back in the fish’s bedding area was the ticket then. But the ones that just ate the swimbait directly were postspawn fish looking to eat something big.”

Arey’s amazing final-day flurry that produced most of his weight happened along a stretch of flat spawning bank peppered with boat docks. His kicker fish came off a dock and tracked his swimbait all the way to the boat before attacking it with about 3 feet of line left out.

“I had literally run out of line,” Arey recalls. “I was just pulling the bait through the water with the rod alongside the boat when the fish inhaled it, and I just boat-flipped her.

“I ended up catching several off docks with the swimbait today,” he continues. “And that’s a classic postspawn deal in the Carolinas. Postspawners will suspend around boat docks and floating piers to recover after the spawn, and if something big comes swimming by, they’re going to eat it.”

Arey can now add a swimbait and a wacky rig to a long list of lures that have contributed to his tournament winnings from Beaver Lake.

“That’s exactly why I love this place,” Arey adds. “It’s so conditional that you never know what to expect.”