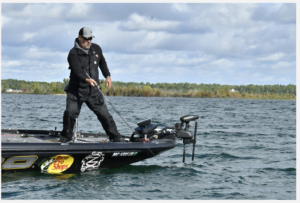 Mark Zona Joins Team Lew’s Lexington, S.C.–January4, 2021–For more than a decade Mark Zona has been one of the most recognizable and respected names in the fishing world, widely known for his efforts as a color commentator on The Bassmaster Elite Series and Bassmaster Classic and his own Zona’s Awesome Fishing Show.

Beginning in 2021, Zona will be representing Lew’s rods and reels. Already a member of the Rather Outdoors family with his long-standing relationship with Strike King, Zona will join a promotional staff that boasts some of the most accomplished names on the water, bringing his own unique flair and list of accomplishments to the team.“

I honestly look at Strike King and Lew’s as one company—a family in a sense,” he said. “I’ve been with Strike King since the day I started TV and joining the Lew’s team just made the most sense for my business and for me personally.”

For the Rather Outdoors team, the opportunity to welcome Zona to the Lew’s team is a great honor. Ken Eubanks, Rather Outdoors’ CEO said “nurturing the relationships that have been entrusted to us by so many that shaped our brands is what makes this announcement so special. We are truly honored to have Mark extend his trust and reputation deeper into our family, honoring the past yet building toward a new future. We are committed to ensuring Mark’s place in our company is one that anglers will have the opportunity to benefit from for years to come and are truly grateful for Mark affording us this opportunity.

About Rather Outdoors Rather Outdoors is a global outdoors corporation uniting some of the most recognizable brands in the fishing space. With historic and iconic brands such as Lew’s, Strike King, Fox, Matrix, Salmo and Fox Rage, Rather Outdoors provides a wide assortment of fishing products worldwide in an effort to enhance angler’s success and the enjoyment of outdoor pursuits. To learn more about the Rather Outdoors brands, visit www.ratheroutdoors.com.