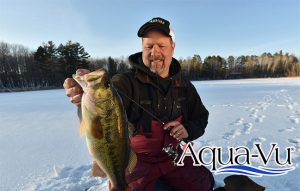 A certain notion says bass don’t much care for the cold. That when winter arrives and seals lakes with ice, big green and brown bass skulk about, but certainly don’t care to bite.

Well, the actual truth is, a small group of exploratory anglers in Minnesota and Ontario have been quietly going about the business of bassin’ through augered holes in frozen lake surfaces. They’ve lipped plenty of largemouth and smallmouth bass. Big ones, too. But perhaps more importantly, the exploratory anglers have proved a few notions of their own, thanks largely to underwater optics documenting the antics of frigid water bass.

Mike Hehner, photographer and producer for Brainerd, Minnesota based Lindner Media Productions has been on the forefront of the hardwater bass movement. Hehner, as well as Ontario angler Aaron Wiebe, believe winter bass are worthy of more angling attention due to the species’ sporting qualities. But both anglers also beg for careful conservation, catch-and-release and selective harvest of small specimens only.

“Honestly, you can catch some of the biggest largemouths of the year right in the middle of winter,” says Hehner. “Winter bass can be pretty stacked up if you find them in the right places. They’ll feed relatively competitively, though they won’t strike as aggressively as they’ll hit say, a spinnerbait in summer.

“Because winter bass like to hide and hunker down in cover just like they do in summer, I’ve always got my little handheld underwater camera—an Aqua-Vu micro Revolution—along for the ride. The camera shows fish in true-life color, while sonar can have a tough time picking up fish signals between aquatic plants.”

Debunking and perhaps confirming long-held conceptions in equal measure, Hehner reveals some of his more surprising underwater discoveries, and offers a few suggestions.

“Bass are a lot more active under the ice—all winter long—than most folks realize,” says Hehner. “Chasing them and getting them to bite is incredibly fun with an underwater camera. And you learn a ton. Winter days on most lakes—even with dozens of other anglers around— rarely is anyone else paying attention to what might be the best big fish game in town. Amazing.

Econo Lodge teams up with MLF