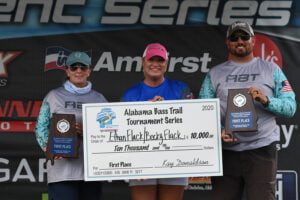 September 12 – Jasper, AL– Lewis Smith Lake concludes the 2020 Alabama Bass Trail North Division Season.  Ethan and Becky Flack were the first team to cross the stage when the scales opened for early weigh-in. They surprised everyone when they registered 17.29 pounds on the scale. They watched and waited as the entire field crossed the stage one-by-one, and at the end of the day, their weight surpassed everyone.

Ethan and his wife, Jorden, are team partners this year. Jorden, as competitive as she is, decided to sit this one out because she is a soon to be new mom. So, Ethan reached out to his alternate partner Becky, whom he also calls mom.  Ethan grew up fishing Smith Lake and spent many years fishing with mom and dad.

The team had an early boat number and felt confident they were going to get their spot. They made a ten-minute boat ride from blast off to their main spot and went to work quickly trying to locate the fish. The area can be described as a winding creek channel full of blueback herring. Ethan said, “it is all about the bait here at Smith Lake, and it really makes the fish move around.” They fished in water depths from 20-25 feet and were forced to move around a lot in that area because the fish were moving around chasing bait. With four fish in the box they were off to a good start until they hit a lull about 9:00. They left the area to see if they could find more fish, but with no luck, they decided to return to their main spot where they were able to make some upgrades to that final 17.29 pounds. The team said, “It was a struggle today. I know we had a good weight, but it wasn’t easy”

Ethan said, “I can attribute this win to Garmin electronics. I ordered the LiveScope a week ago, stayed up late last Friday night to put it on my boat and practiced with it last weekend to get used to it. It really helped to see the bait and the fish. We went to some of our other spots today where we had fish, and they were just gone.”

Becky was all smiles when they held up the $10,000 check and the first-place trophy. She said, “this was a very special day! Take your kids fishing; it makes for a lifetime of memories, and this one is one I’ll never forget.”

“Beating dad felt really good and to get him on his home lake is pretty hard.  He’s won a whole lot of money here and it’s really unreal” said Ethan.  This win makes them the first co-ed team to win an ABT event.

They primarily used two baits to target spotted bass and largemouth chasing blueback herring in the water column: a 4 inch Keitech Easy Shiner and a

2.8 inch Keitech Swing Fat impact both in shad colors. They rigged them on 3/8 ball heads to help keep the bait down deeper and used a slow retrieve.

The second team to cross the stage was Craig Daniel and Jackie Flack. With 15.63, it was enough to secure second place. Craig and Jackie have decades of experience and numerous wins on Smith Lake.  Craig has won four boats here and, as a team, they won the first ABT Championship.

For them practice really paid off. “We worked really hard the last two weeks to find these fish.” They had a few areas located that were holding fish, but their key area also had a couple boats in it- one of those boats being Ethan and Becky. On the water Becky said there “was some trash talking because she knew Craig and Jackie weren’t going to cut them any slack.”

Jackie also said the Garmin electronics were key. He said, “it really gives you confidence when you can turn it around and see the bait and the fish, cast right to them then watch your bait come through and the fish chase and bite it.” Craig said, “over the years we had to constantly change; we don’t even fish the same way we fished five years ago. We had to tweak and learn our electronics, or these other guys would just beat our brains out.”

They were also throwing a 3/8 ball head with a Zoom and Keitech Swim Bait. Jackie said, “if you aren’t fishing the blueback herring at Smith Lake, somebody else is and they are beating you.  We had blueback spit up in the live well that were 6 inches long.” They reported together they “caught about 15 fish over the slot throughout the day.”

The first-year team of Mark Condron and Tony Simeri take home the North Division Angler of the Year with 1058 points. Mark and Tony were really excited to see their name at the top of AOY. They said, “we learned a lot this year. The fishing was really tough this whole year.  We tried to figure them out in practice to a point but ended up doing something different on tournament day, and it worked out.” They join 8 other teams from the north division and qualify for BASS Team Championship later this year.

This concludes the 2020 ABT North Division. The top 75 teams (North Teams) in points have Qualified for the two-day championship along with 10 regular season winners, top 15 student teams, top 5 collegiate teams and top 5 couple teams (from both divisions). The no entry fee Championship will be held on Lake Martin October 23-24. 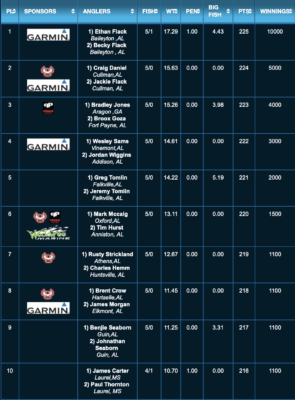 Benefits of Fishing for Students