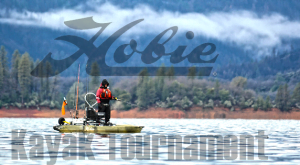 Oceanside, CA (March 13, 2019) – The second tournament of their new elite-level kayak series, the Hobie Bass Open Series (B.O.S.), on Lake Shasta, California, this past Saturday, March 9, and Sunday, March 10, was a success on many levels. Sponsored by Headwaters Adventures, the local Hobie dealer in Redding, California, and the U.S. Forest Service, the event saw participants catch an extraordinary number of spotted, largemouth, and smallmouth bass during the two days. The event was an equal opportunity event operated under special use permit with the Shasta-Trinity National Forest.

“Of 64 registered anglers all 64 fished the event. It was a two-day tournament and and anglers were allowed five fish each day, any combination of largemouth, smallmouth, and spotted bass, and iAngler was facilitated the leaderboard, judging, etc. for the real-time tournament,” says Lake Shasta Bass Hobie Open Series tournament director, Bryan Rusk.

Rusk continues: “The tournament started out good on Saturday. The weather in the morning was in the mid- to upper-30s. Anglers got on the water quick. We do a shotgun start from three ramps but we let everyone leave at the same time because a lot of the spots are close. The competition started good right away. Anglers began posting fish almost a minute or two after we told them they could have lines in the water. The first person had his five fish within 30 minutes so we knew it was going to be a good two days. We ended up logging 930 fish caught between 64 anglers and I’m sure there was another 1000 fish caught that weren’t registered. When it comes to spotted bass, Shasta is just a really good fishery year ‘round,” says Rusk.

In terms of weather conditions, the first day was cold, overcast, in the mid-30s and started snowing about 10 am. Then there was sleet and rain, followed by rain the rest of the day and temperatures between 40 to 45 degrees. Despite the weather, however, anglers caught loads of fish. 49 of the 64 limited out on the first day.

The second day there was a little drizzle and the change with daylight’s savings time. The wind was never more than 5 or 10 miles per hour and then calmed down in the afternoon. It then started clearing up and got real sunny, after which anglers started logging bigger fish. Sunday’s launch time was 6:45 a.m. and first cast at 7:15 am. Both days the tournament ended at 3 pm but Sunday was technically an hour shorter; still, the tournament ended up logging 498 fish the second day.“

The competition was close. Because the average fish on Shasta is about 14.5 to 15 inches and there are a lot of them, the leaderboard changed all the time—both days—up and down. And then the bigger fish started to come in, 17-, 18-, and 19-inch fish. The smallmouth bass averaged a little bit bigger than the spots with 16- and 17-inch, so that had an effect, too. So the first day was really pretty good. I think we logged 432 catches among 64 anglers – and 930 for the whole tournament – so on average it was like 14.5 fish per angler, which is really good for a tournament. About 50 of the 64 got their five fish each day so pretty much everyone was catching fish. So it was very exciting,” adds Rusk.“

Kong Her was the Day 1 leader and ended up finishing second overall. After the two days we had a tie for first place with 165.25 inches. Kong Her was first after Day 1 with 82.75 inches and Greg Blanchard had 77.5 inches. On Day 2, because they tied, we had to go to the largest catch on any single day and Greg Blanchard ended up winning that with 87.75 inches on Day 2. Kong Her, who was incredibly consistent, had only a quarter inch difference between his first and second day score. That’s the unique thing about Shasta, there are so many fish and they’re all the same size, the competition is so close, that even if you’re way down on the leaderboard you can come back and win the thing on the second day. It’s pretty easy to catch a couple kickers and come back. And that’s exactly what happened. In the last hour Greg and Kong culled some fish and ended up exactly tied. But Greg ended up with some bigger fish a combination of 16.25-, 17.75-. 18.75-, and 19-inchers,” says Rusk.

Winner angler Greg Blanchard, of Seneca Falls, New York, credits his win to “doing something a lot different” than most anglers in the tournament. “I found a really good finesse-style jig bite on long tapering points, picking up reaction bites. I really had to snap the jig to work through the rocks and every time I’d get the snag out a fish would smash the jig. It was probably the best jig bite I’ve ever had. Every fish I caught in the tournament was on a jig,” says Blanchard. 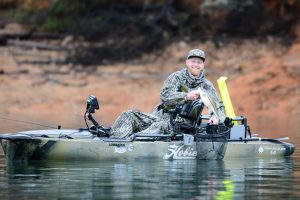 Third-place finisher Tim Arthur boats another spot into his Hobie Pro Angler 14. Photo by Steve Carrell.“ The first day I caught 35 or 40 fish. On Day 2 I visited the same long tapering points and I was hoping to find a new wave of fish. The sun on the second afternoon brought out a bigger class of fish and I only had about 12 bites but the fish were definitely of a better, bigger quality. I changed from green pumpkin to a black and blue jig on Sunday to match the dirty water and that definitely did the trick,” adds Blanchard.“

I’m definitely excited to fish the Tournament of Champions and the 2020 Hobie Worlds; both will be awesome experiences no matter how the fishing is. That’s definitely been my M.O. the past five years or so and that’s to travel and fish new places and meet new people.”

Greg Blanchard also hosts a kayak fishing YouTube channel and his tournament recap should be posted within the next week. He can be found by searching for Greg Blanchard on YouTube.

Birthed out of t 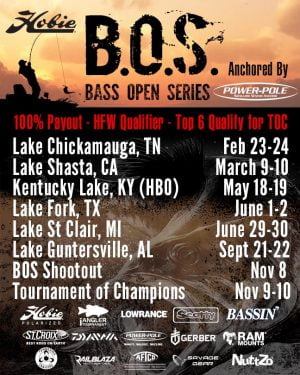 heir popular Hobie Bass Open on Kentucky Lake, and in response to angler demand, Hobie has created what is essentially the first elite-level tournament circuit in kayak fishing, the 2019 Hobie Bass Open Series (B.O.S.). The BOS will comprise of six Open events, 11 satellite tournaments, one last chance shootout, and a Tournament of Champions (TOC) in November 2019 on Arkansas’ Lake Ouachita and hosted by Mountain Harbor Resort.

A Catch, Photo, Release (CPR) format—a conservation-based practice that actually finds its origins in competitive kayak fishing—will test an anglers skill on premier fisheries during prime conditions. Anglers will be able to turn in their longest 5 bass each day in hopes of maxing out a 10 fish limit, scored in inches, over the course of the two-day tournament.

Keeton Eoff, Director of Global Strategy, Hobie, remarks: “What an incredible event. Not only was it one of the largest kayak events in the Country, but the fishing was truly phenomenal Shasta came through big time! Special thanks to all those who supported the event and made it happen.”

About Hobie Since 1950, Hobie has been in the business of shaping a unique lifestyle based around fun, water and quality products. From their headquarters in Oceanside, California, Hobie Cat Company manufactures, distributes and markets an impressive collection of watercraft worldwide. These include an ever-expanding line of recreation and racing sailboats, pedal-driven and paddle sit-on-top recreation and fishing kayaks, inflatable kayaks and fishing boats, plus a complementary array of parts and accessories.

B Lat and Mark Daniels Take Home the Gold