RUSSELL COUNTY, Ky. — While Nolan Minor and Casey Lanier have been one of the most consistent teams to grace the Carhartt Bassmaster College Series presented by Bass Pro Shops stage over the past few years, they had fallen just short of winning a national event.

That changed Saturday when Lanier and Minor caught 16 pounds, 14 ounces of smallmouth bass to take home the title on a stingy Lake Cumberland with a three-day total of 39-2. They topped Griffin Phillips and Ethan King of the University of Montevallo by more than 10 pounds.

“When I first started college fishing, second place felt great,” said Minor, who finished second in the College Classic Bracket in 2018 on Milford Lake. “But then it started to get old. You know there are so many guys on the outside looking in wishing they could just be second place. But after you have been there a couple times, it kind of leaves a bad taste in your mouth.

“To win something really means a lot.”

With 30 minutes to go on Day 2 — and with only two fish in their bag — Minor and Lanier abandoned the shallow pattern they found in practice and started fishing a deep point with a Carolina rig and a shaky head, catching two fish that kept them inside the cut heading into Saturday’s championship round.

Lanier said they decided to stay deep Saturday, and it paid off with the Nitro Big Bag of the tournament, earning them a $250 gift card to Bass Pro Shops along with $2,108 in tournament winnings for their club.

Small crawfish imitators like a Baby D Bomb and a Zoom Z-Craw worked best on the back of their 3/8-ounce Carolina rigs.

“They were all the baby sizes,” Lanier said. “They were imitating the little crawdads that were down there. That’s what the smallmouth wanted. We ran out of a few baits and had to throw some new ones on there and ended up catching fish too.”

Minor added they used a light-wire 3/0 hook that he believes helped keep their fish pegged in the rocks.

On the final day, Lanier said he and Minor targeted smallmouth on main-lake points in the 15- to 25-foot range. The area they fished on the final day had a lot of shale rock — and with some wind and boat traffic, the water became less clear than other areas of the lake, Minor said.

“(The water) looked kind of green. I think that helped the bite out because the water here is really clear and the fish are getting a lot of pressure,” he said. 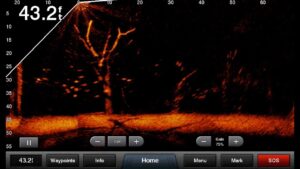 Phillips and King used Garmin Panoptix to locate their fish on main-lake points in 25 to 30 feet, catching 28-14 for a second-place finish. They used a couple of finesse techniques to coax their smallmouth to bite, including a drop shop and a Ned rig, and caught most of their fish around one specific area.

“We weren’t fishing if we didn’t see them,” Phillips said. “When we saw one, we dropped on it and we dropped on as many fish as we could a day. The ones that bit we caught and the ones that didn’t we just had to move on.”

Andrew Fisher and Bennett Kudder from Bryan College finished third with 28-13, just an ounce behind Phillips and King. Fisher and Kudder caught fish dragging a worm on a drop shot or a shaky head on tapering main-lake points.

Brock Bila and Jack Long from Drury University held on to the Carhartt Big Bass of the tournament, earning a $500 Carhartt gift card after catching a 6-0 largemouth on Day 2.

With the regular season now over, qualifying teams will now look ahead to the Carhartt Bassmaster College Series National Championship presented by Bass Pro Shops scheduled for the Harris Chain of Lake in Florida Oct. 29-31. The 2020 season will conclude with the College Classic Bracket on Alabama’s Lay Lake Nov. 17-19.

Sunday’s event will be the final regular season event for both the High School and the Junior Series and the last chance for teams to qualify for their respective national championships.

This week’s tournament is being hosted by the Russell County Chamber of Commerce and State Dock on Lake Cumberland.

2020 Bassmaster Classic Generates Millions and Millions for For Birmingham