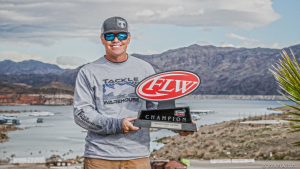 HENDERSON, Nev. (March 2, 2019) – Pro angler Tim Klinger of Boulder City, Nevada, brought the second-largest stringer of the entire tournament to the scale Saturday – a five-bass limit weighing 15 pounds, 4 ounces – to win the Costa FLW Series at Lake Mead presented by Ranger Boats. Klinger’s three-day total of 13 bass weighing 34 pounds, 12 ounces gave him the win by 4-pound, 12-ounce margin over second-place pro Lane Olson of Forest Grove, Oregon, and earned him the $32,778 prize in an exciting finale to the three-day event that kicked off the 2019 FLW Series Western Division season.

“The key for me this week was my confidence in my flipping,” said Klinger, who pushed his career earnings over the $600,000 mark in FLW competition. “I was born and raised on this lake, and I’m very comfortable fishing here.”

Klinger said he spent the first two days of the event flipping bushes in the Overton Arm of Lake Mead. He said that he caught four fish on the first day throwing a Beast Coast Tungsten Flipping jig with a Super Pork Bubba Frog trailer. On the second day, he switched to a Texas-rigged 4-inch green-pumpkin-colored craw and added another four keepers. On Day 3, the wind kept him closer to the takeoff so he spent the day in Boulder Basin, throwing a white ¾-ounce War Eagle spinnerbait, and caught 11 keepers, and the second-largest limit of the tournament.

“I caught a couple of smallmouth throughout the week, but all 13 of my keepers that made it to the scale were largemouth,” Klinger said. “All week long I was throwing my baits on a 7-foot, 6-inch, Taipan Rods Flipping Stick, with 20-pound fluorocarbon or 50-pound-test braided line.”

Klinger spent all three days of competition fishing shallow, and said that every fish he caught came between 2- and 9-feet-deep. The two-time FLW Cup qualifier was fishing in his 107th career event in FLW competition.

Ed Arledge of Valley Center, California, weighed a 6-pound, 12-ounce, bass Friday – the biggest of the tournament in the Pro Division. For his catch, Arledge earned the day’s Boater Big Bass award of $216.

Jesse Parks of Avondale, Arizona, won the Co-angler Division and a Ranger Z175 with a 115-horsepower outboard motor with a three-day total of nine bass weighing 23 pounds, 8 ounces.

Diaz and Dean Sexton of Costa Mesa, California, both caught a bass weighing 5 pounds, 2 ounces, out of the back of the boat Friday – the largest in the Co-angler Division – to split the Co-angler Big Bass award of $144.

The Costa FLW Series on Lake Mead presented by Ranger Boats was hosted by the Henderson Chamber of Commerce Cultural Arts and Tourism Department. It was the first of three Western Division tournaments of the 2019 regular season. The next tournament for FLW Series anglers will be the Costa FLW Series at Lake Chickamauga presented by T-H Marine, held March 21-23 in Dayton, Tennessee. For a complete schedule, visit FLWFishing.com.