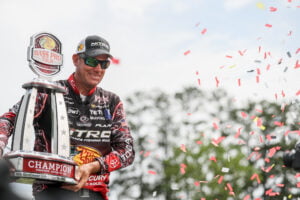 It was a tight five-angler race to start the third and final period of competition but VanDam quickly pulled away, boating a dozen scorable bass weighing 34 pounds, 2 ounces, in just 30 minutes. VanDam won by a 6-pound, 10-ounce margin over second-place pro Jacob Wheeler, who caught 24 bass totaling 63 pounds, 7 ounces, good for $45,000.

“That last period – to get on a flurry like that. Man, that was incredible,” said VanDam, who pushed his career earnings to more than $6.9 million. “Any time you can have that kind of day fishing is special, but to do it on the last day of a Bass Pro Tour event is pretty dang awesome. This (trophy) was something that I’ve really wanted since we started this, so today was a pretty special day for me.”

VanDam earned his victory this week on Lake Chickamauga doing what he loves to do – fishing the deep Tennessee River ledges.

“I found those fish in practice and when I hit that school, I knew that I’d really found something special,” VanDam said. “I just had to wait for that window when the current gets just right and when it happened, it was magical. 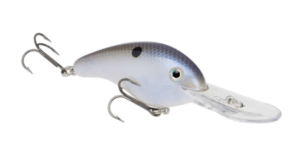 “I caught fish on a lot of different baits this week, but far and away the Strike King Series 5 (green gizzard) and Strike King 5XD(blue gizzard shad) crankbaits were my money baits, all week long,” VanDam continued. “I fished them on my signature system – a Lew’s CC4 Cranking rod paired with a Lew’s BB1 Pro reel , 12-pound Bass Pro XPS fluorocarbon line, and I threw a couple of No. 2 Mustad Triple Grip (treble hooks) on there. I was fishing the bait real

fast and really making the fish react to it, even when they didn’t want to bite.” 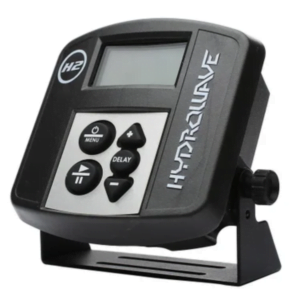 VanDam also credited his Humminbird electronics and HydroWave as being crucial to his success.

“My confidence was through the roof today,” VanDam said. “I had all of the tools that I needed. My whole system – my boat, my electronics, my rods, my reels, my hooks – it’s a whole system that I’ve developed over the past 31 years and I was really able to showcase them today.

“I finished runner-up to (Jacob) Wheeler the last time we were here, so today was really gratifying,” VanDam went on to say. “To go against the field that I did – Wheeler, Jordan (Lee), Michael Neal and Jason Lambert – two Tennessee ledge hammers – and win is just really special. I’ve won a lot of events and I promise you this – you appreciate every win more than the last, because you never know when you’re going to get your next one. And you never know when it could be your last one.”

Overall, there were 132 bass weighing 383 pounds, 9 ounces caught by the final 10 pros on Wednesday.

Pro Ott DeFoe of Blaine, Tennessee, finished the event in 17th place and did not qualify for Wednesday’s Championship Round, but his finish was still good enough to overtake Lakeland, Florida’s Bobby Lane in the MLF Bass Pro Tour Angler of the Year standings. DeFoe’s total of 283 points gives him a 17-point lead over the second-place pro, California’s Brent Ehrler (266), with three events remaining in the season. Wheeler is third with 258, followed by Kansan Brent Chapman in fourth place with 257 and Lane with 256 to fall into fifth place. Full AOY standings for the entire Bass Pro Tour field can be found at MajorLeagueFishing.com.

The MLF Bass Pro Tour B&W Trailer Hitches Stage Four at Lake Chickamauga Presented by ATG by Wrangler was hosted by Fish Dayton and the Rhea Economic & Tourism Council. The six-day tournament featured 80 of the top professional anglers from around the world competing for a purse of $805,000, including a top cash prize of $100,000 to the winner.

Television coverage of the B&W Trailer Hitches Stage Four Presented by Wrangler at Lake Chickamauga will be showcased across two two-hour episodes, premiering at 7 a.m. ET, Oct. 9 on the Discovery Channel. New MLF episodes premiere each Saturday morning on the Discovery Channel, with additional re-airings on the Outdoor Channel and the Sportsman Channel. Each two-hour long reality-based episode goes in-depth to break down each day of competition.

The Bass Pro Tour features a field of 76 of the top professional anglers in the world – joined at each event by 4 pros that qualify from the Tackle Warehouse Pro Circuit – competing across seven regular-season tournaments around the country, competing for millions of dollars and valuable points to qualify for the annual Heavy Hitters all-star event and the REDCREST 2022 championship. The next event for Bass Pro Tour anglers will be the General Tire Stage Five at the St. Lawrence River Presented by Berkley, June 25-30 in Massena, New York.

About Major League Fishing
Major League Fishing (MLF) is the world’s largest tournament-fishing organization, producing more than 250 events annually at some of the most prestigious fisheries in the world, while broadcasting to America’s living rooms on CBS, the Discovery Channel, the Outdoor Channel, CBS Sports Network, the World Fishing Network, the Sportsman Channel and on-demand on MyOutdoorTV (MOTV). Headquartered in Tulsa, Oklahoma, with offices in Benton, Kentucky, the MLF roster of bass anglers includes the world’s top pros and more than 30,000 competitors in all 50 states and 13 countries. In 2019 MLF acquired FLW and rebranded it as MLF BIG5, which expanded its portfolio of catch, weigh and immediate release events to include the sport’s strongest five-biggest-fish format tournament circuits. Since its founding in 2011, MLF has advanced the sport of competitive fishing through its premier television broadcasts and livestreams, and is dedicated to improving the quality of life for bass through research, education, fisheries enhancement and fish care.