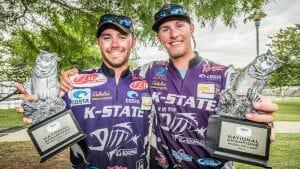 The Kansas State University team of Travis Blenn of Westmoreland, Kansas, and Kyle Alsop of Overland Park, Kansas, weighed a five-bass limit Friday totaling 11 pounds, 11 ounces, to win the 2017 YETI FLW College Fishing National Championship on Wheeler Lake presented by Lowrance C-Map Genesis. The Wildcat duo’s three-day total of 15 bass for 44-12 gave them the win by a 1-pound, 12-ounce margin over the 2015 National Championship winners, Patrick Walters and Gettys Brannon from the University of South Carolina, who finished second with 15 bass for 43-0.

“This is the last college fishing tournament of my career,” said Alsop, a recent engineering graduate. “To go out like this is just unbelievable.”

“We didn’t think that we had enough,” said Blenn, a junior at Kansas State University. “We were lucky enough to get the big bites the last two days, but we just didn’t get them today. I was sure that we needed one more. But sure enough, it was enough.”

The Wildcat duo said that their key bait throughout the week was a green-pumpkin-colored Zoom Brush Hog, rigged three different ways – Carolina-rigged, Texas-rigged and on a Big Bite Baits Swing Head. They said that they caught their fish out deep on ledges in Decatur, flipping docks and dragging the Brush Hog in and around brush piles in a creek.

“All week long we threw the Brush Hog,” Alsop said. “Today when it slowed down we picked up a shaky-head rig with a Big Bite (Baits) Super Stick on it, but the Brush Hog was the key. We dyed the tails chartreuse.”

“No matter what happens tomorrow, me and Kyle are good enough friends that it will all be good,” Blenn said. “And if by chance I do beat him tomorrow, I think he’s a good enough stick to make it there on his own, eventually.”

“I hope to make a career in professional fishing,” Alsop went on to say. “I’m going to start working to qualify for the Tour next year and we’ll see how far I can make it. Tomorrow Travis and I are just going to go out and get after them and we’ll see what happens.”

Full results and standings for the remaining field can be found at FLWFishing.com.

The 2017 YETI FLW College Fishing National Championship, hosted by the Florence/Lauderdale Tourism Bureau, featured 139 of the top college bass fishing clubs from across the nation competing for a $30,000 prize package, including a new Ranger Z175 boat with a 90-horsepower Evinrude outboard and entry into the 2017 Forrest Wood Cup. The Forrest Wood Cup, the world championship of bass fishing, will be held August 11-13 on Lake Murray in Columbia, South Carolina, and will offer a collegiate angler the opportunity to compete for a top award of $300,000.

Television coverage of the YETI FLW College Fishing National Championship will premiere in high-definition (HD) on NBC Sports Network (NBCSN) Oct. 4 from Noon -1 p.m. EDT. The Emmy-nominated “FLW” television show airs on NBCSN, the Pursuit Channel and the World Fishing Network and is broadcast to more than 564 million households worldwide, making it the most widely distributed weekly outdoors-sports television show in the world.

College Fishing is free to enter. All participants must be registered, full-time students at a college, university or community college and members of a fishing club recognized by their college or university.