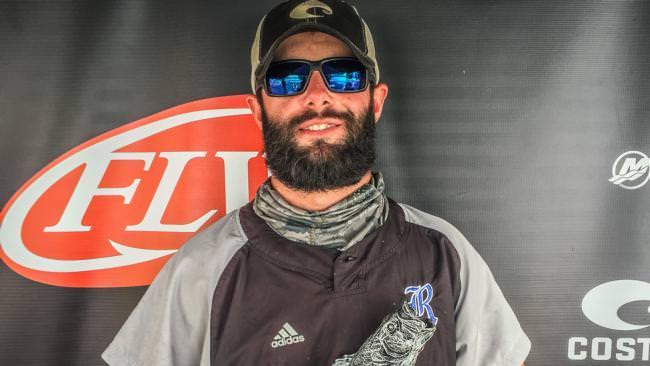 “I’ve never caught that kind of weight on this lake,” said Joyce, who earned his first win in BFL competition. “I’ve had several 20-pound limits out there, but nothing like this.

“I caught 6-pounder within the first 15 minutes,” continued Joyce. “I caught a 4-pounder and three smaller ones before the bite died. I really needed the wind to blow, but it was a calm day.”

Joyce said he targeted two stumps on the end of a creek point between Waterfront Bay and Goose Pond. He said he caught his fish throwing a Carolina-rigged, pumpkin-colored stick bait.

“After three hours, the wind picked up and I was able to catch more bass and cull,” said Joyce. “I worked the stumps from all angles to try and dial in on where they were setting up. If I could get the bait hung up under the stump, I’d yank it out, stop it and that would trigger a bite.”

Joyce finished by saying that he caught his largest fish with only minutes to spare.

“It was one of those special days of fishing that I’ll remember for a long time,” said Joyce.

The top 10 boaters finished the tournament in:

Foister caught a 9-pound, 1-ounce bass – the biggest of the tournament in the pro division – and earned the day’s Boater Big Bass award of $625.

The top 10 co-anglers were:

Daniel Davis of Albertville, Alabama, caught the biggest bass of the tournament in the co-angler division, a fish weighing 8 pounds, 1 ounce and earned the day’s Co-angler Big Bass award of $312.

The BFL is a 24-division circuit devoted to weekend anglers, with 120 tournaments throughout the season, five in each division. The top 50 boaters and co-anglers from each division qualify for a regional tournament and are competing to finish in the top six, which then qualifies them for one of the longest-running championships in all of competitive bass fishing – the BFL All-American. Top winners in the BFL can move up to the Costa FLW Series or even the Walmart FLW Tour.