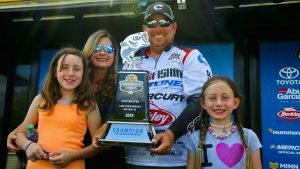 May 25, 2019 in DAYTON, Tenn. — John Cox carried nearly an 8-pound lead into the final round, no doubt, this builds confidence, but John Cox readily acknowledged the good fortune that enabled him to slam the door on a wire-to-wire win in the Basspro.com Bassmaster Eastern Open on Lake Chickamauga with a three-day total weight of 66 pounds, 5 ounces.

“It was an amazing week,” Cox said. “So many of my fish catches were so special, and it seemed like luck played into a lot of them.

“Today, I didn’t see one of my key fish — a 5-pounder — until the last second. He didn’t see me, for some reason. I flipped over to the fish and it ate my bait. When I got it into the boat, I realized I was on its blind side; it was missing his eye. If it had been any other direction, I wouldn’t have caught it.”

Cox caught all of his bass in shallow water, including bluegill beds, banks with deeper water adjacent and docks. Although he had planned to fish offshore shellbeds and bars in 8 to 14 feet of water, Cox found his areas too congested with other anglers on Day 1. Snooping around in the shallows quickly convinced him that’s where he needed to remain.

“The first day, I caught a couple good ones out there, but then it got really crowded in those areas,” Cox said. “I didn’t feel comfortable being around all those people, so I said ‘I’m just going to do what I like doing,’ so I got up shallow.

“Once I saw fish swimming around up there, I got sucked into it and I never went back out to those shellbars.”

For his efforts, Cox won $43,800 and earned a berth in the 2020 Bassmaster Classic presented by DICK’S Sporting Goods. This win, he said, elevated Chickamauga to the top of his personal list.

“I don’t know what to say; this used to be my second-favorite lake, but after this one, it’s definitely my favorite,” Cox said. “I love it when we get to come here, I love all the people and I hope we get to come back.”

Chris Peters of Birchwood, Tenn. finished in second place with 61-10. After tying for 28th place on day one with 14-9, the local fireman who left the weigh ins to start his weekend shift, rose to fourth on Day 2 after catching 20-3. Adding 26-14 today moved him up two notches.

“It took me a little while to get dialed in,” Peters said. “On Day 1, I ran a lot of spots. I had about 30 places I wanted to try. I got them dialed in yesterday and got them dialed in better today. Everywhere I stopped today, it was (catching) one after another.

“I was throwing a big jig, but the deal was the Trixter Custom Tackle Rowdy Craw trailer. It’s a hand-poured plastic so it’s a lot softer and has a lot of action. I think that played a key role today and all week.”

Gross caught several of his bass this week on swimbaits and crankbaits, but today, he tempted his biggest fish on a 3/4-ounce green pumpkin Nichols casting jig with a green pumpkin Zoom Super Chunk trailer.

“I was fishing spots with a little grass mixed in with some brush, and the jig seemed to be the deal today for the bigger bites,” Gross said. “I just slowed down. I had been catching smaller bass on a dropshot, so I decided to go with more of a big-fish bait.”

Jon Jezierski of Troy, Mich., won the co-angler division with 32-2. His was an impressive comeback story, as Jezierski placed 84th on Day 1 with 5-7, but roared back a day later with a three-bass limit that weighed 14-3 and pushed him up to fourth. Today, he claimed the win by adding 12-8 — the final round’s only double-digit co-angler bag.

“Getting on the water with my practice partner, (Elite angler) Garrett Paquette, allowed me to see quite a bit of the lake,” Jezierski said. “I followed his lead whether it was fishing ledges deep or docks shallow, or grass. We put it all together and I took it as each day came.”

John Goul of Philadelphia, Miss. won the Phoenix Boats Big Bass award among co-anglers with a 9-7.