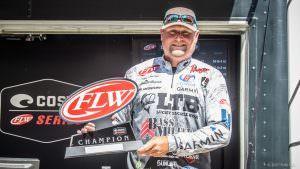 “After the Tour season that I’ve had, this feels pretty damn good,” said Lambert, who earned his fifth career victory in FLW competition – second on Kentucky Lake. “When I won the Tour event here last year I was fishing down south, but this year I caught most of my fish north of Kenlake (marina).”

Lambert, fittingly proclaimed the ‘Ledge Hammer’ on the cover of this month’s FLW Bass Fishing magazine, said that he had 25 to 28 schools of fish located out deep on the ledges coming in to the event. He said that he only could get to 15 of the schools during the tournament, but it turned out to be more than enough.

“The first day I caught all of my fish on just three different schools,” Lambert said. “I didn’t have a ‘mega-school’, but I rotated through the areas that I did have. It was tough to get on stuff today – there was a lot of local traffic. That’s pretty standard for a lake that is fishing as well as Kentucky Lake is, though.”

Lambert said that he caught close to 40 keepers on each of the first two days of competition, but only managed a dozen Saturday. He estimated that of the 15 fish that he weighed in this week, eight came via a 6th Sense Lures C25 crankbait, five came on a HogFarmer Hog Wobbler jig head with a Castaic Baits Jerky J and two came on a Gene Larew TattleTail worm, in green-pumpkin.

“The key was absolutely locating those schools of fish with my electronics,” Lambert went on to say. “Having several different schools marked and ready to go gave me the confidence to fish for the win this week.”

The top 10 pros on Kentucky Lake were:

Micah Frazier of Newnan, Georgia, caught a bass weighing 8 pounds, 6 ounces Friday – the biggest of the tournament in the Pro Division. For his catch, Frazier earned the day’s Boater Big Bass award of $300.

The top 10 co-anglers on Kentucky Lake were:

Jojo Walsh of Lyles, Tennessee, caught the biggest bass of the tournament in the Co-angler Division Thursday, a largemouth weighing 8 pounds, 6 ounces, and earned the day’s Co-angler Big Bass award of $200.

The Costa FLW Series on Kentucky Lake presented by Lowrance was hosted by the Kentucky Lake Convention and Visitors Bureau. It was the second of three Central Division tournaments in 2017. The next Costa FLW Series tournament will be the Northern Division opener, held June 22-24, on Lake Champlain in Plattsburgh, New York. For a complete schedule, visit FLWFishing.com.

Record Underwater Videos with your Phone

Upshaw Buries the Tomahawk to Take Home a Hundred Grand