Crosslake, MN (March 3, 2020) – Tournament anglers sneak it out of their boat’s storage to spy on bass during prefishing. They glance at its live video screen when sonar signals resemble question marks. Other than a scuba mask, it’s the only tool that shows what’s actually living in brushpiles, hunkered down in vegetation or hiding below boat docks. In these scenarios and many others, an underwater camera has proven to be a valuable, trustworthy fish-finder. Now, following the lead of their bass boat brethren, kayak anglers have begun to adopt the live video technology, too.

“After seeing firsthand the effectiveness of an Aqua-Vu for finding fish under ice, I realized an underwater camera could be an equally powerful kayak fishing tool,” says Kristine Fischer, an accomplished tournament angler who’s won multiple Hobie® Bass Open Series (B.O.S.) events. “Having actual underwater eyes shows me a lot of little details—things sonar can’t reveal, like the color of crayfish, the type of vegetation, or the caliber of bass dwelling around deep rocks.” 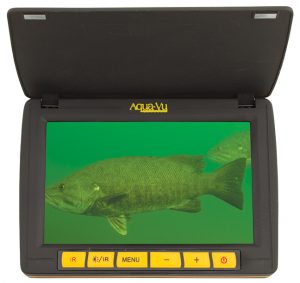 Recognizing the natural link between kayak fishing and underwater viewing, Aqua-Vu president Kolt Ringer recently initiated new partnerships with both Fischer and the Hobie Bass Open Series. “We’re super excited to expand into the growing sport of kayak fishing and to get Aqua-Vu cameras into the hands of these super-progressive anglers,” says Ringer.

“Inquisitive and enthusiastic anglers like Kristine Fischer and competitors on the Hobie BOS circuit are already helping spread the word among the kayak community— that an Aqua-Vu delivers a whole other dimension of on-the-water fun and the ability to positively identify fish species and reveal the actual appearance of underwater structure,” adds Ringer. “Our micro™ series cameras are a perfect fit for any kayak application— as compact and easy-to-use as a fishing reel.”

Count Hobie Fishing Team & Events Specialist Keven Nakada among the growing group of small boat Aqua-Vu fans. Since first deploying a cam from his kayak in the Pacific Ocean near Hobie’s SoCal headquarters, Nakada become an underwater video convert. “It’s amazing to see how different fish use body color and camouflage to blend into their surroundings. Without the camera, you’d never know a lot of these fish were down there—and might skip right over them while fishing. The camera has opened my eyes in a lot of ways and has made me a better angler.

“No doubt, this is a tool that will start catching on in the kayak community, especially as Kristine and other top ‘yak anglers start demonstrating its capabilities” notes Nakada. 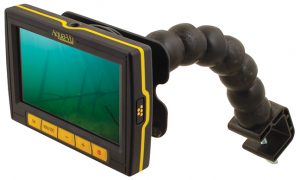 An Aqua-Vu Pro Snake mount instantly mounts a camera to any kayak.

An integrated camera retrieval system increases the convenience factor.
As Fischer and other anglers on the Hobie BOS circuit travel to upcoming tournaments at places like Lake Erie and Kentucky Lake, an Aqua-Vu camera will play a valuable role in locating bass and productive spots during pre-fishing. Notes Fischer: “My pre-fishing methods are meticulous, with hours of map, Google Earth and sonar study. An Aqua-Vu brings everything together so I can be one-hundred percent certain I’m fishing for the right fish on precisely the right locations.”

“A lot of kayak anglers already use a GoPro style camera to film the above-water action,” says Ringer. “So, it’s no surprise that kayak anglers are excited to look beneath the surface with an Aqua-Vu. The difference is, our cameras display the underwater world in real-time, right on the screen.”

Why Brandon Palainuk Returned to B.A.S.S.

Easy to Use Online PDF Editors