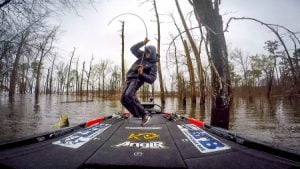 This is a question that’s been kicked around for decades now, ever since Ray Scott brought a few guys together back in 1967 to add a little structure to competitive bass fishing. And since you’re reading this on a fishing website, chances are you’ll agree with my opinion, that yes, bass fishing is very much a sport. But the purpose of this article isn’t to convince you of that.

“Don’t You Just Sit There?”

I was recently getting to know a young lady and the topic of tournament fishing came up. She was shocked when I told her that we could actually compete for money while fishing. I asked her what she thought of when she heard the word fishing and she delivers the same response I’ve gotten several times throughout the years, “Well you get your cooler with the beer, you put a worm on the hook and then you just have to sit there and wait.” And this was a girl from Alabama.

I’m not writing this to convince you that fishing is a sport. I’m writing this to give you something to show people who just don’t get it because they’ve never experienced it.

For starters, let’s take a brief look at what competitive fishing is versus what some people believe it to be.

No, you’re not sitting on a bucket with a beer in hand, you’re screaming down the lake at 70-miles per hour being pelted in the face by sleet, rain, and snow, crashing into 3-foot tall waves that jar your whole body from toes to teeth. All the while keeping the pedal to the metal because you know a hundred and fifty other guys are doing the same thing. No, you’re not getting hit by a blitzing linebacker, but if we can all agree that badminton is a sport, I think we can quickly see that fishing is certainly physically demanding enough to qualify.

It’s rare that a tournament is canceled or postponed due to weather. Basically there has to be an extremely imminent danger. Nothing short of 40-mile per hour winds or a near biblical flood will typically delay competition. In baseball, if a slight sprinkle starts coming down it’s time to cover the infield and wait it out.

The ever-changing playing field of bass fishing is what makes it not only a sport but a sport far more challenging than most. Week to week to week, you go from fishing Lake Okeechobee to Lake Lanier to the Sabine River. For those who are unfamiliar with fishing, that’s about like playing regular soccer one week, then soccer on ice the next week, then soccer on the beach the next.

You have to be extremely versatile.

These tournaments happen on public waters and the lake doesn’t just shut down. Which means there is a lot of non-competitor influence on the game. Imagine if Tom Brady dropped back to pass and a guy from the stands just ran out on the field and intercepted the ball. That’s exactly what happens in the sport of competitive fishing when an angler makes a 25-mile run, only to find someone not even in the tournament sitting on the place where he wanted to start.

That’s one of the things that I think make it hard for people to see fishing as a sport. There are too many variables. Not enough of a controlled environment.

That is honestly what makes fishing that much more complex and challenging. The mental dexterity and fortitude that it takes to process a situation like that, then turn around and go through plans B, C, D, and E before you finally figure out something and put a bag of fish together. That’s impressive. That’s difficult. Most of us just spin out. The good ones, they bare down and grind through.

I will give the naysayers a little slack when it comes to the physical requirements that it takes to get in a boat and go fishing. We don’t really stack up specimen wise against the athletes you see on the basketball court or the baseball diamond. It’s a little difficult to use the term “athletes” when describing a lot of us, myself included. But I’ll take “fierce competitor” in it’s place and wear that badge with honor. 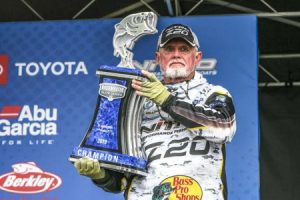 Truthfully, I think this is another place where people just get caught up in not knowing anything about the sport. I’m 33 and I just spent two days on the water. My dad and I drove 3-1/2 hours to Guntersville, spent about 8 hours on the water practicing one day, then fished 8 hours during the tournament the next and then drove back home. And I am absolutely exhausted… and again, I’m 33. Rick Clunn is 73 years old.

Last year at 72, he dominated a field of anglers ranging from their early 20’s and up. Photo Credit: Andy Crawford of BASSMASTER

Clunn spent 7 days on the water, 3 practicing and 4 competing. Up each day around 4 AM, in bed by 10 PM if he was lucky. Grinding it out. That’s impressive and embodies what is so special about the sport of bass fishing. How the weight of knowledge and experience and grit stack up when placed on the scales alongside youth and energy and physical stamina. The younger, more athletic anglers have a physical edge for sure, but experience and metal fortitude are so valuable in this thinking man’s game. The field of competitors is as vast as the field of competition itself, so there are some great battles between psyche and physique.

Competitive anglers not only need to be strong mentally, but they also have to be smart. There is a lot of technology and science wrapped up in competitive fishing these days. There are electronics on our boats now with capabilities that would impress even Bill Gates himself. And bits and pieces of meteorology, anatomy, biology, geology, and other sciences all come into play when trying to catch a bass.

The “Bubba” that a lot of people picture sitting on a bucket watching his cork is actually more often than not a fairly polished 40-year old using words like thermocline and lateral line. A few like MLF Bass Pro Tour pro-Greg Vinson even earned a degree in Marine Biology to have a better understanding of what’s happening below the water’s surface.

So there’s a lot more to fishing than most people think, especially competitive fishing. It’s not a cork and a cooler. Though there’s nothing wrong with that, competitive fishing is so much more. It’s extremely demanding physically. It’s a mind game that will scramble a man between the ears in a hurry. It’s ups and downs and long days fishing in extreme heat and extreme cold. It’s picking ice out of your rods guides every 4 or 5 casts because they keep freezing up. It’s getting an IV after a tournament on Lake Havasu in the desert. It’s hours of boredom interrupted by moments of sheer insanity.

It’s fun. It’s challenging. And by all means, it’s definitely a sport. Don’t believe me? Bring your money down to the boat ramp and try playing it yourself sometime. 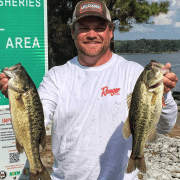 How High School Anglers Can Preparefor a Fishing Future

Attempting to Sell Your Boat? These 5 Tips Can Help You Seal the Deal