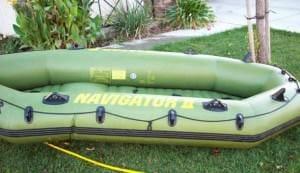 Jeremy’s tools of the trade: a 10ft aluminum boat loaded to the max, and a 8ft rubber raft

STOCKTON, Ca. – Call it luck, call it fate, or you may even want to say it’s a fluke, but whatever name you choose to give it, the fact of the matter is that Jeremy Coffel and team partner Jay Fieber have serious skills – and can flat out fish.

And this year in particular, which represents only the 3rd year Jeremy has been participating in competitive bass fishing, has done much to move this young Atwater California angler’s game out of the ranks of obscurity and into the coveted category of being known as “dangerous” amongst his angling peers as he has taken his fleet of bass boats to just about every lake in northern and central California to prove he belongs in the fight with those he admired only three short years ago.

He’s got a fleet of bass boats you say? You have to be kidding…right?

Anybody with multiple rigs that can travel up and down the state to compete in both the FPT’s central and northern regions certainly has no business participating at the FPT level. After all, having access to two boats surely puts the rest of the field of amateur-level anglers at major disadvantage … right? 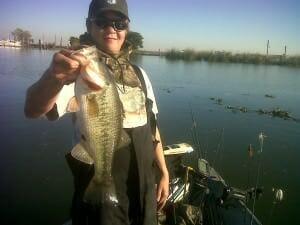 What you don’t know is that the catalyst that forever changed Jeremy Choffel’s destiny and put him on a path to become a serious contender in the competitive bass fishing world, took place a little over 2 years ago, one day late spring afternoon as the FPT crew was setting up and preparing for its Lake McClure weigh-in.

There he was… sitting on a somewhat rocky bank, baseball cap on head and dime-store rod in hand..asking a probing question to the set up crew: “What’s going on..what are you guys setting up for?”

Watching carefully each minute of that afternoon’s dramatic weigh-in, he then inquired about what it would take to participate, and surprisingly showed up to participate at the very next FPT event – with an 8-foot Zodiac rubber raft, complete with 4hp engine, all stuffed in the back of his small pickup truck.

To make a long story short, that year, he and his team partner faired extremely well, holding their ground – in spite of the muffled laughs, and taunting whispers metered out by those in the field fishing out of brand new 18-20 foot fully loaded bass boats.

The taste of that year’s success still fresh in his mouth, the following year Jeremy made the decision to upgrade, moving to a much more spacious rig, and a rig that would give him the edge he needed to be more successful. That “upgraded” rig was a 10-foot no-name aluminum boat loaded with so much gear one could not see even one square inch of the floor.

But Jeremy, persistent and on a mission, put his head down, and got busy, as he and his new team partner finish several times in the top ten, and won the Angler of the year in the FPT’s small boat division.

This year Jeremy and new partner Jay Fieber from Stockton, California are on a roll, capturing a 2nd place finish in last month’s event on Lake McClure, and simply crushing a field of nearly 50 teams with a dominating performance in last weekend’s event on the California delta – competing in the big boat division.

So unless you’re in total denial, you have to concede that Jeremy has truly arrived, and is a walking poster boy for the old saying, that “Boats don’t catch fish…fishermen do”.

In last Saturday’s win over a field of tough competitors, they indicated that they fished less than half a mile away from the launch ramp to bag an impressive 23.97 pound 5-fish limit, earning themselves $1,700 dollars cash and their first FPT title.

“After launch we drove the boat along the shoreline about 200 yards…and started fishing”, Jeremy explained to a delighted – and shocked crowd of spectators present at the awards presentation.

On just about the first cast of the day I hooked an 8 pounder, and Jay followed that up almost immediately with a 6 pounder… then we caught three other good fish to go with it – all on River2Sea crank and top water baits”, he added.

Big congratulations to Jeremy and Jay on their first FPT title and what is for sure a milestone accomplishment. Jeremy, you and your partner have proven to everyone that cares to listen, that what it takes to be a winner in the sport of competitive bass fishing is a little bit of patience, unwavering determination, and a “no excuses” attitude.

New Melones Lake and the final event for the central valley region!

The race for the inaugural Coors light Angler of the Year crown is too close to call and what will determine who wins this prestigious title will simply come down to who WANTS IT the most.

We are all going to be on the edge of our seat waiting to see the outcome!

See you all there!

The Future Pro Tour is presented in part by:

Skin Cancer Remains the Most Common Cancer in US, Americans Urged to Take Action

How to Avoid Disqualification in a Tournament

2021 Ray Scott Championship to be Held at Chickamauga