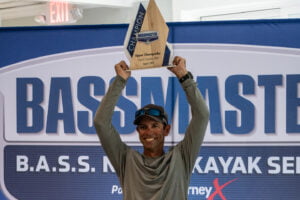 CECIL COUNTY, Md. — With one minute to spare before lines out, Michael “Ike” Iaconelli landed an 18.50-inch bass that lifted him to victory Saturday in the Bassmaster B.A.S.S. Nation Kayak Series powered by TourneyX at Upper Chesapeake Bay.

It’s been a good couple of weeks for the popular New Jersey pro and 20-time Classic qualifier. His Kayak Series win comes on the heels of a fourth-place finish at the Basspro.com Bassmaster Northern Open at Oneida Lake, which lifted Iaconelli to second in the Northern Division points race.

“I’m proud of this one. I’ve been trying for three years to win a professional kayak event and I finally won one,” Iaconelli said. “It feels really, really good. It is a big moment for me. Kayak fishing has been great for me personally and a lot of the companies I work with are supporting me fishing on the kayak side as well.

“I launched an Ike-approved Hobie at ICAST this year. I’ve only fished out of it about six times. What a great way to break in a new kayak.”

The victory also gives Ike a win at every level of adult Bassmaster competition.

“I’ve won as an amateur, I’ve won as a Nation angler, I’ve won at the Open level, the Elite level, the Classic and Angler of the Year,” he said. (Iaconelli won the 2003 Bassmaster Classic at the Louisiana Delta and captured the Angler of the Year title in 2006.) “I talk to Brandon Palaniuk a lot and one of his goals is to win at every level of B.A.S.S. and the Classic is sort of the last thing he has left to win.

“But not now. If he wants to top my record he has to get a kayak and win a kayak event.”

Iaconelli’s winning fish engulfed his Berkley MaxScent Creature Hawg with just enough time for him to haul it into the boat, measure it and photograph it before the official lines out time of 2 p.m. ET.

“It’s funny how those things happen like that,” he said. “I was flipping and flipping and watching the time click. At 1:59 p.m., I pitched in a mat and it sank about a foot and the hydrilla shook. I saw my line jump and set the hook, cranked it in on 65-pound braid, swung it in, unhooked it and submitted the picture all within a minute. It was an incredible thing.

“It ranks up there as one of the most exciting fish catches I’ve ever had in my life.”

Throughout his years of tournament fishing, Iaconelli has accumulated hours of experience on the Upper Chesapeake Bay, a place he calls a “premier fishery” in the Northeast. This time of the year, however, is one of the more difficult seasons to generate bites.

“It is a special place, but it has this ugly stage which is early August through late September,” he said. “Today was one of those days. It was hard to get bites. Sometimes the grind tournaments, when you do well or win, mean even more than the easy ones.”

Iaconelli fished parts of a big grass flat, specifically targeting ditches that drained out of the flat as well as hard hydrilla edges that were pinned against deeper creeks that ran through the flat.

With all of his experience on the Upper Chesapeake, it was the first time he fished these specific areas of the flat.

“The quality that lives out there is what attracted me to that flat. It has a tremendous amount of 15- to 20-inch largemouth. The challenge was finding them. One of the reasons it gets so tough in August is that flat turns into a grassbed. It is mainly hydrilla, star grass, eelgrass and it is 5 square miles of it.”

Iaconelli landed five bass around the drains and ditches on a Texas-rigged black/blue flake Berkley PowerBait The General with a 1/16-ounce VMC nail weight on an Abu Garcia spinning rod. His two biggest bites came punching the hydrilla edge with a black/blue flake Berkley MaxScent Creature Hawg paired with a 1-ounce tungsten weight and a 4/0 VMC Flippin’ Hook.

He said the tide played a major role.

“The golden rule of tidal fishing is low water is always the best,” he said. “I had an early window of low water. This morning I caught four within the first hour and a half. When we started it was low but coming in.”

“As the tide started to come in, the bite really shut off. I went a long time without a bite. I caught the 19.50 on the bad tide, a dead high tide, and that got me my limit.”

Leach used two different patterns to claim second place in his first-ever Kayak Series event. He also claimed Big Bass of the Tournament honors after winning the tiebreaker against Iaconelli with a 19.50 and a 19.00-inch bass.

After his two days of practice, Leach decided to fish the Sassafras River section of the Bay. After failing to get a buzzbait bite first thing in the morning, he switched to a Z-Man Evergreen ChatterBait JackHammer and landed three of his five keepers around wood in deeper pockets in the river bends.

West Virginia angler Greg Harper finished third with 78 inches of smallmouth bass. Harper ventured up the Susquehanna River, an environment that matched the style of his home waters.

His bait of choice was a Lucky Craft squarebill crankbait and a 4-inch Yum Dinger rigged on a weighted wacky rig jighead around rock and wood targets.

“My day started out pretty slow. I didn’t catch my first fish until around 8 o’clock,” Harper said. “But after that, it was fast and furious. I caught a limit within an hour, and I caught a lot of fish all day long, just not a lot of size.”

The top four anglers from the event punched their tickets to the 2022 Kayak Series National Championship, which will be held in conjunction with the 2022 Academy Sports + Outdoors Bassmaster Classic presented by Huk at Lake Hartwell.

Practical Tips To Choose The Right Scope For Your Rifle

Who’s Made the Elites this Year?

12 Steps to Repairing, Repacking or Replacing Your Trailer Bearings

Six Things You Should Ask Before Purchasing a Boat

John Acosta Gets a New Gig with Costa

12 Steps to Repairing, Repacking or Replacing Your Trailer Bearings

Six Things You Should Ask Before Purchasing a Boat

John Acosta Gets a New Gig with Costa