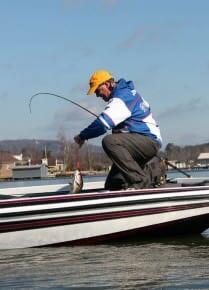 “If you look at tournaments held this time of year on any grass lake, a lipless crankbait is almost always a major player,” Jones said. “It may not be the winning lure, but it always seems to play a big part.”

Lake Guntersville is undoubtedly a grass lake, so you can trust that Jones will spend significant time throwing an XCalibur Rattle Bait, One Knocker or Cotton Cordell Super Spot as he looks for the winning fish and pattern at the Bassmaster Classic Feb. 21-23 and during the official practice days that precede the main event.

The time-proven truth that it works is reason enough for Jones to throw a lipless crankbait. Like most pros, though, the 2008 Bassmaster Classic champion has theories about what makes a Rattle Bait such an important part of the late-winter/early-spring arsenal.

“It’s the best bait I know of for generating a reaction strike in cold water from a bass that otherwise has no intention of eating,” Jones said.

Jones mostly uses a lipless crankbait to work what he calls “short grass,” which, depending on the lake and the exact part of the season may be hydrilla or other submerged vegetation from the previous year that has mostly died back, or it could be the new season’s first growth. Either way, stems typically only come up a couple of inches off the bottom.

Early in the spring, Jones says he fishes more with an XCalibur One Knocker than a Rattle Bait. The lures look the same, swim the same way and are available in the same ½- and ¾-ounce sizes, but the One Knocker gets its sound from a single knocking Tungsten ball instead of a group of rattling BBs.

“I don’t have any scientific explanation or even much of a theory,” Jones said. “I’ve just found that I do better with a One Knocker early in the spring, so that is the one that I usually throw.”

Jones considers the depth of the grass when selecting lure size. For grass that tops out between about 2 and 5 feet, Jones uses a ½-ounce Xrk50. If it’s deeper than 5 feet, he’ll go with the Xrk75, which is the ¾-ounce version.

“If I have a choice of areas, I’ll choose the place where I can fish the ¾-ounce because there’s truth to what they say about bigger baits producing bigger fish,” Jones said. “The ½-oiunce size is what most guys are throwing, so with the ¾ I’m more likely to show the fish something different from what they have been seeing.”

If the fish are using grass that’s less than 2 feet deep and Jones wants to keep his presentation slow he reaches for a ½-ounce Cotton Cordell Super Spot. A Super Spot is slightly lighter relative to its body size than most lipless crankbaits and often is more effective in shallow water.

Jones’ No. 1 color for a lipless crankbait definitely is Rayburn Red. Other colors that often perform well for him include Royal Shad, Gold and Oxbow.

“Color is something I need to test day-by-day to see what they want,” Jones said.

The most productive presentation likewise varies daily, so Jones often experiments to figure out how the fish want the lure moving. Usually, though, the winning action is some version of one of three basic presentations.

If the weather is really cold and Jones expect the fish to be extra lethargic, he starts with what he calls a ripping presentation, letting the lure sink to the bottom, snapping the rod tip sharply upward to rip the lure out of the grass and letting it fall again, and then repeating that all the way back to the boat.

“That makes the bait jump, which is what a crawfish does when it is being chased, and I believe when the bait jumps up right in front of a bass it prompts a reaction strike.”

Jones’ second presentation is what he calls a slow roll, which sounds completely steady but actually involves an ongoing cycle of speeding up and slowing down. If Jones is not feeling grass, he slows the retrieve until he does. If he is feeling grass, he speeds it slightly.

The idea is to keep the bait barely ticking the grass, which is the triggering mechanism. Letting the bait fall too far causes it to bog down. Not touching the grass keeps it out of the strike zone.

Finally, Jones likes a burn-and-pause presentation, cranking almost as quickly as he can turn the reel handle, but stopping the retrieve about every 10 feet so the bait’s motion pauses for a moment.

“A fish will follow that fast-moving bait, but with no real intention of eating. When the bait pauses the fish literally runs into it, and its instinctive reaction is to open its mouth and eat the lure,” Jones said.

“Over grass” is the short answer to where Jones likes to throw a lipless crankbait, but not all grass is created equal. The vegetation has to be crisp to hold fish.

“It doesn’t need to be bright green necessarily,” Jones said, “but if it gets mushy and bait bogs down easily, it’s not good hydrilla. The bait should be self-cleaning with a good rip of the rod.”

Because Jones is targeting prespawn bass this time of year, he’s looking for grassy areas that bass use as they begin to move shallower.

“I want to be close enough to visually see where the bass will spawn,” Jones said. “If the bass spawn in the back of a bay in 2 feet of water, they’ll likely be farther out holding in a patch of grass in water 5 feet deep.”

Ideally, Jones likes to find some little ditch or drain that leads to the spawning area. Fish will relate to even very slight breaks as they work their way shallower prior to the spawn. Like choosing colors and finding the right retrieve, though, identifying the exact depths and kinds of areas the most fish are using is a patterning game, and discovering the perfect combination can be the key to winning the Bassmaster Classic.

In February, Alton Jones, who won the 2008 Bassmaster Classic on Lake Hartwell, will compete in his 16th Classic and seventh in eight years. Jones has tallied six B.A.S.S. wins and nearly $2.3 million in career B.A.S.S. earnings. His highest finish on Guntersville is second place in a 2006 Elite Series Event.

Tournament Pre-Fishing and the Bassmaster Classic

Bass Edge gets a new Boat

Easy Ways to Up Your Fishing Game