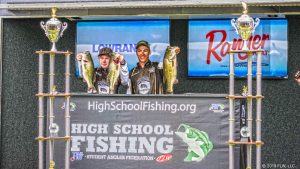 Snyder said he plans on joining the United States Marines after his upcoming senior year, while Cicero says the victory will have a life-changing impact on his future.

While many of their competitors opted for Pickwick’s traditional offshore ledge game, the winning anglers quickly determined that their best opportunities would be found shallower. Working in the Mulberry Creek area, upriver from Kroger Island, Cicero and Snyder focused on shallow grass with wood and caught fish from 8 inches of water to five feet. They had plenty of area at their disposal, but ended up sealing the deal on a single piece of cover.

“We were fishing this stump where we had caught a couple in practice and we caught our three best fish there today and ended it all,” Cicero said.

Anchoring their limit was a 7-pound, 7-ounce largemouth that earned Big Bass honors for the day.

“In the morning, we would burn it right above the grass and later in the day we would slow roll it to get it down deeper in the grass,” Cicero said.

Complete results from the event, along with the weigh-ins, can be found at HighSchoolFishing.org.

About The Bass Federation
The Bass Federation Inc., (TBF) is a member of the Freshwater Fishing Hall of Fame. TBF is owned by those we serve and dedicated to the sport of fishing. The Federation is the largest and oldest, organized grassroots fishing, youth and conservation organization there is. TBF, our affiliated state federations and their member clubs conduct more than 20,000 events each year and have provided a foundation for the entire bass fishing industry for more than 45 years. TBF founded the Student Angler Federation and the National High School Fishing program in 2008 to promote clean family fun and education through fishing. Visit bassfederation.com or highschoolfishing.org and “LIKE US” on Facebook.