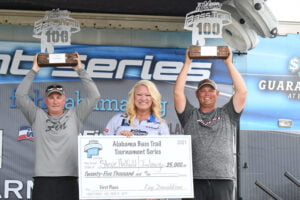 Eufaula, AL- 100 Teams launched at Lakepoint State Park for the second of three events in the brand-new Alabama Bass Trail 100 series. The ABT 100 series features 100 teams, 100 percent payback and a $100,000 total payout in each event.  Steve Hatfield and Jim Leary claimed the first-place title, took home the hardware and $25,000.

The team said this was the first time for them to fish Lake Eufaula.  “We began to prepare for this lake right after the Lay Lake event” starting practice last weekend and spending the whole week here developing a game plan. “We spent two days idling, mapping and marking.   We marked everything because we didn’t know what we would need until we actually started fishing.”

They found their key spot in practice on Monday “on the side of a road bed with some key brush piles on it and standing timber around it. The water depth was 8-12 feet, and it was near a channel that came from shore out to the main lake. We believe the fish were working their way out to the ledges.” They fished the road bed and found it to be holding the quality fish they were looking for.

They feared that this spot wouldn’t hold up because the fish were headed out to the ledges and would pass through this area quickly, so they spent the rest of the week looking for the same type areas. They also fished the ledges “but struggled getting any size or very many bites on them.”

On tournament morning they made the run to the road bed and quickly went to work. They were surprised that no one else was already on the spot and hoped the fish were still there. They targeted the fish using “big snake style worms,” and found that a Zoom and Big Bite Baits 8-13 inch worm Texas Rigged, Red Bug and Plum Apple were the most productive. They quickly discovered the fish were still there, and in ten minutes, they caught three fish close to 17 pounds including the 6.32 pound largemouth that took big fish in the event. Most of the ten minutes was spent trying to land those big fish. They said, “the fish were so strong they actually pulled the boat onto the brush pile.” They fished around the area catching a few smaller fish returning to the key spot throughout the day but did not get any bigger bites. However, it was more than enough to take the win with 25.26 pounds- almost a 4 pound lead over second place. They collected a $25,000 check plus bonuses including a Phoenix Boats bonus. 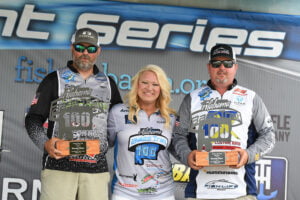 The second-place team of Ken Walters and Dallas Weldon weighed in 21.31 pounds of Lake Eufaula Bass. Dallas shared, “in practice we didn’t get on anything out deep.” They practiced separately and he focused out deeper while Ken focused in the mid-range water depth.  They both “found a shad spawn that they hoped would produce early, but because of the warmer weather, the water temps warmed up about six degrees and caused that bite to die out” on Saturday. Combine warming water with falling water and “the fish are going to have to move somewhere.” After they discovered that the shad bite had gone away, they headed out to fish other areas and they defined “stuff fish get on when they leave the bank, like the first little piece of cover.” Ken said, it was the “kind of stuff he was marking in practice.” It’s why you have to “practice and find those kind of areas” because today it paid off using the backup plan,” said Dallas. The baits used were a Texas rigged 10 inch worm and unnamed creature bait paired up with a Crusher Lures ½ oz head. Key colors were Green Pumpkin and red bug. They felt this event “fished more like a club tournament that pays a lot more and the field size really helped them have more water to fish.” They also added the Wedowee Marine Bonus to their $12,000 payday. 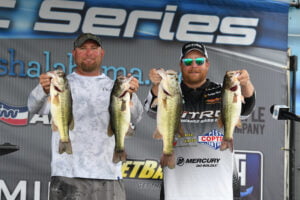 Anthony Goggins and Dustin Wood claimed third place with 20.93. Dustin was a favorite in this event after winning an event the previous weekend with over 22 pounds. The morning was tough for them because they didn’t get to fish anything they wanted to fish- they had a “local following them trying to figure them out.”  They work hard to keep the areas they fish a secret, so instead of helping someone else figure out their spots, they left their main areas to go and “fish community holes and get a limit around lake point.”  After they got a limit they went back to some of their key areas, and since the on-looker didn’t follow them, they were able to get to their areas. Dustin said, “the Lord really blessed us because every time we made a cast where we felt something was good we caught a four pounder.” The team shared their frustration in having to protect their areas, but they felt it was something worth protecting for future events. “We really baby our areas and don’t fun fish them during the week. They are kind like pets, and we wanted to take care of them. It takes hard work to find them, and we don’t want to give them up.” They targeted the fish using a 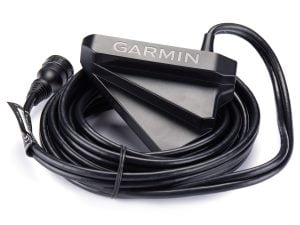 Red Shad worm on a ¾ oz drop shot. They also shared that the Garmin Live Scope really helped them to be able to find the fish on the cover.  In spite of the circumstances, they were able to be successful and cash the third place $10,000 check.

The third and final stop of the Alabama Bass Trail 100 will be on Lake Eufaula, Saturday, November 20, where, once again, 100 teams will go for the $100,000 total payout. The Angler of the Year points race is really tight with lots of big names at the top of that list.

Top five standings are below for a complete list see https://www.alabamabasstrail100.org/lake-eufaula-results/