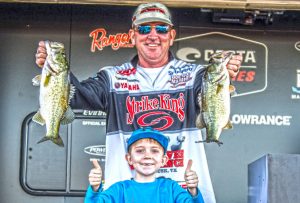 DEL RIO, Texas (Jan. 5, 2019) – Local pro Ray Hanselman of Del Rio, brought five bass weighing 12 pounds, 1 ounce, to the scale Saturday to win the 2019 season-opening Costa FLW Series at Lake Amistad presented by Ranger Boats. The tournament was shortened from three days to two after competition was cancelled Thursday due to bad weather. Anglers started competition Friday, with boater and co-angler winners determined by heaviest cumulative two-day weight on Saturday. Hanselman’s two-day total of 10 bass weighing 38 pounds even was enough to earn him the victory and a check for $36,751.

Hanselman last won on Lake Amistad in FLW Series competition in 2015, a season where he swept the Southeastern division and went on to win the Costa FLW Series Championship. The four-consecutive wins, dubbed “Hanselmania” by FLW web editors, was one of the most dominant performances in the history of tournament bass fishing.

“It’s sure nice when they have a tournament on your home lake like this,” said Hanselman. “I really like to fish this time of year, too.”

Hanselman’s win this year was anchored by a 25-pound limit, which he caught Friday working a flat basin in a creek arm. He looked for scattered grass in 15 to 25 feet of water and targeted bass that were transitioning from winter patterns to prespawn staging spots. He said he found his fish on three particular clumps of grass.

“There’s a subtle ditch that ran down the middle of it – the center of the ditch was 16 feet deep and the sides were 13 feet down and I was cranking the grass that laid over it,” said Hanselman. “It’s just little patches of it. That’s the way you want it because that congregates them on [a few] good patches. This place was set up good with grass that was growing a foot or two off the bottom. Once you find that grass with your bait, you can stay on it cast after cast. One of those grass beds had three giants in it, including one that was about 7 pounds.”

Hanselman threw an umbrella rig early in the day Friday, but cited a Strike King 5XD crankbait as his main bait. Noting that natural colors work best in the lake’s clear water, he chose a bluegill-shad pattern.

“I threw my baits on 10-pound-test Gamma fluorocarbon [line], just trying to get it down to the top of the grass,” said Hanselman. “I don’t want to bog it down. I just want to touch the grass every now and then.”On Saturday, Hanselman said he returned to the basin but had trouble getting bass to bite the crankbait early on.

“I caught one right off the bat on the crankbait, and I could see them on my graph, but they wouldn’t hit,” said Hanselman. “I picked up a drop-shot rig [with a KVD Magic-colored Strike King Dreamshot] and caught a limit, which settled me in.”

Hanselman said he left around 11:30 a.m. so he could let the area rest, and caught some small ones and a couple more keepers. He returned around 2:30 p.m. and caught one on the 5XD crankbait and one on a suspending jerkbait.

A complete list of results will be posted at FLWFishing.com.

Roy Whisenhunt of Valliant, Oklahoma, weighed an 8-pound, 6-ounce, bass Friday – the biggest of the tournament in the Pro Division. For his catch, Whisenhunt earned the day’s Boater Big Bass award of $260.

Jay Childs of Houston, Texas, won the Co-angler Division and a Ranger Z175 with a 115-horsepower outboard motor with a two-day total catch of five bass weighing 20 pounds, 9 ounces.

Helveston caught the biggest bass of the tournament in the Co-angler Division Friday, a fish weighing 8 pounds, 11 ounces. For his catch, Bates earned the day’s Co-angler Big Bass award of $200.

The Costa FLW Series on Lake Amistad presented by Ranger Boats was hosted by the Del Rio Chamber of Commerce. It was the first of three Southwestern Division tournaments of the 2019 regular season. The next Costa FLW Series tournament will be the Southeastern Division opener, held Jan. 31 – Feb. 2 on Lake Okeechobee in Clewiston, Florida. For a complete schedule, visit FLWFishing.com.

Get Your Start as a Co-Angler

NETBAIT has a New Owner