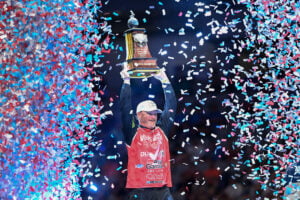 FORT WORTH, Texas — Bass Cat Pro Hank Cherry now occupies some rare air in the sport of professional bass fishing, and he has the bank statements to prove it.

He is only the fourth angler in the 51-year history of the Super Bowl of Professional Bass Fishing to win the event in back-to-back years. He earned another of the iconic Classic trophies and his second $300,000 check in 18 months.

Another North Carolina pro, Matt Arey, finished second with 49-1 and lost at least one big bass on Championship Sunday that might have put him over the top.

“I feel bad for Matt, and I told him I’ve been where he was,” Cherry said. “I had the same thing happen to me and mine happened a lot closer to the boat. 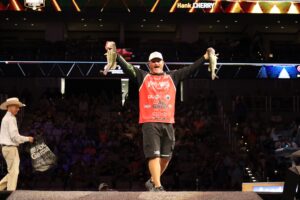 Cherry, a nine-year veteran of the Bassmaster Elite Series, finished third in his first Classic back in 2013 on Grand Lake O’ the Cherokees. Like Arey, he lost a crucial fish in that event that would have given him the trophy.

He went through a tough stretch in the Classic after that, finishing no higher than 27th in three tries. But then he put the bad memories of 2013 behind him last year on Lake Guntersville when he caught 29-3 on the first day and rode that mammoth bag to a wire-to-wire victory.

He didn’t quite go wire-to-wire this year, starting in third place on the first day with a limit of 20-4. But as suffocating heat moved into the area, the fishing got tougher and Cherry remained consistent enough to stay on top with a Day 2 catch of 17-10 and a final-round bag of 13-1 that was just enough.

He caught the bulk of his weight during the week flipping flooded bushes along the shoreline and throwing a jerkbait around riprap along the dam.

“The bite in the bushes is going away,” Cherry said. “It’s so hot out there right now. The water temperature was 71 degrees when we got here for practice, and I saw it as high as 87 today. A lot of those bushes are starting to break down, and those fish just don’t want to be there.

“I was fortunate to get enough out of them to win.”

For flipping the bushes, Cherry used a 3/4-ounce tungsten weight with a 4/0 flipping hook and a variety of soft-plastic baits, including a Berkley Pit Boss, a craw lure and a beaver-style bait.

“I would just alternate between five or six baits, back and forth,” he said. “That probably wasn’t as much for the fish as it was for me. Whatever I was using, I was doing the same thing. But it felt like I was doing something different.”

When the bass got extremely lethargic in the 99-degree heat Sunday, Cherry did actually make a change to his flipping setup, switching to a 1/4-ounce tungsten weight with a 3/0 Fusion19 hook with 20-pound-test Trilene 100% Fluorocarbon spooled on an Abu Garcia Revo STX (7.3:1) paired with the new Abu Garcia Veritas PLX Tournament rod. The new rod, with its distinctive and aggressive all-black rod blank, is scheduled to go on sale in July. He had two fish in his livewell at the time but caught three bass to fill his limit within 30 minutes after making the switch.

“I caught maybe the dumbest bass in the lake,” Cherry said. “I flipped into a bush and instead of going into the bush, that lighter bait kind of ricocheted off of it. The bass actually swam out of the bush to get the bait and swam back in with it.”

That fish weighed almost 4 1/2 pounds and helped Cherry recharge on a day when he said sweat was constantly rolling into his eyes and blinding him.

Cherry spent a majority of the tournament fishing the new Berkley Stunna jerkbait, which he helped design. Cherry said he threw the size 112+1 Stunna in Stealth Shad on 15-pound-test Trilene 100% Fluorocarbon. He paired the line and bait selections with an Abu Garcia Zata casting reel (7.1:1) mounted on a 6-foot-10-inch Abu Garcia Winch rod.

When Cherry fished the rocks along the dam, he used a new (coming soon) Berkley Stunna jerkbait in the stealth shad color. He believes he caught the tail end of the jerkbait bite, just as he did with the flipping bite.

“The bushes I was fishing, if the lake was at normal pool, they wouldn’t even be in the water,” Cherry said. “So, you know the fish are probably itching to move away from there and go offshore.

“I think the same is true around those rocks. The heat is just radiating off those things — and if it makes us miserable, you know it probably makes them miserable, too.”

Cherry said he enjoyed his reign as the 2020 Classic champion even though the year was marred by the COVID-19 pandemic and many of the personal appearances he might have made as Classic champ didn’t happen.

Whether this next reign will be different, he couldn’t say for sure.

“I don’t know what to expect, I really don’t,” Cherry said. “I’ll just take it as it comes — and I’ll never doubt just how blessed I am.”

Frank Talley of Temple, Texas, took home Berkley Big Bass honors and an additional $2,500 for his 8-3 caught on Day 1.

As part of the Yamaha Power Pay program, sixth-place finisher Scott Canterbury of Odenville, Ala., earned a $20,000 bonus.

The Bassmaster Classic was hosted by the Fort Worth Sports Commission and Visit Fort Worth.