Amid a sea of new soft plastic creations, the traditional Kalin’s twister-tail grub 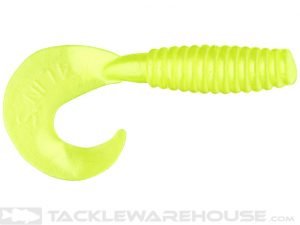 is often overlooked by today’s bass anglers. This is unfortunate because the single-tail grub continues to catch big smallmouth bass. Without a doubt, my favorite grubbin’ time is during the transition period as smallmouth move from wintering grounds to shallower flats prior to the spawn.
In some smallmouth regions the grub remains a must-have lure in the spring. For example, it would be a sacrilegious act for an angler not to have one of these floppy tail grubs tied on at least one rod when bruiser brown bass begin moving into the bays of Wisconsin’s Door County Peninsula. On the waters of Lake Erie, a grub is standard fare in April and May. And a grub is always within reach of every river rat on a northeastern river system.

Grubs can be fished on deep 18 to 25 foot main lake flats and shallower bay flats in 8 to 15 foot range, as well as uphill or downhill on the major breakline where smallies typically stage during transition. Now to the critical retrieve for early spring: fish the twister-tail grub like a hair jig in cold water! A grub retrieve imitates a preyfish. I don’t drag it or hop it. Just swim it… slowly near the bottom. A grub presents a larger profile than a hair jig. By providing a more visible slow moving offering, a grub turns into search bait. In the cold-but-warming spring temperatures, smallmouths are not in an aggressive chase mood. However, a baitfish-like grub will grab their attention, and if the retrieve speed is slow enough, smallmouth will swim after and engulf it. I always cast a grub. However on a recent trip to Sturgeon Bay, Dan Elsner of Get Bit Baits explained the locals often pull grubs on the flats with their electric motor. If you have massive areas to cover, slow trolling may be an option. But if you are a caster, cast it long and count it down until it bumps bottom. Then begin slowly swimming it back to the boat while attempting to keep it 12 to 24 inches above the bottom. Yes, it’s only going to be a guesstimate on the distance above the bottom. If you believe the grub is being pulled too far away from structure, slow down or pause long enough for it to tap bottom.

Before discussing techniques you’ve got to start with the right grub. All twister tails are not created equal. The most important design feature is a thin, flexible tail which allows an easy swimming action (i.e. the “floppy tail” nickname for these baits). The tails on all brands will swim when pulled quickly through the water, but only a handful of grubs demonstrate full-range swimming motion at very slow retrieves. Having experimented with numerous brands over the years, here are four named grubs that have extremely active tails: 4 & 5 in Kalin’s Lunker Grub, 4 in Yamamoto Grub, and 4″ Gene Larew’s Rally Grub.

Speaking of color, I am a believer that figuring out the right hue will trigger more bites. Sometimes a small color adjustment can increase the number of bass you catch. In clear water, I favor translucent or almost translucent colors (clear, smoke, watermelon) with silver flake or rainbow sparkle. I frequently use a dye marker or spray to add a hint of chartreuse color to the tip translucent grub’s tail. If a normally clear water lake is somewhat stained as the result of a weather event, then I switch to a darker translucent color (dark smoke, avocado, root beer) with purple or orange flake. Solid opaque colors rarely find their way onto my line except when fishing lakes or rivers with habitually dingy water.

The leadhead for a grub is as important as the grub itself. I favor the Spot Stalker head from Bass Stalker 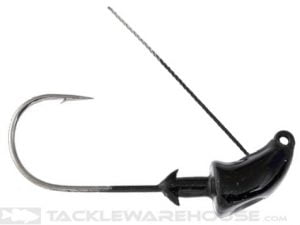 Jigs as an all-around choice for large profile grubs. The Spot Stalker has a tapered head design and single wire cable weedguard which allows it to slip through sparse vegetation without collecting strands of weeds. When fishing open water, the weedguard can be easily snipped off. The head is available in six weights from 1/16 to 3/8 oz – including those great in-between weights of 3/16 and 5/16 ounce, which are critical to achieving the proper slow speed at a particular depth. But if the water is exceptionally clear and the smallies particularly finicky, I lean towards a realistic minnow head with an identifiable eye and a color pattern which closely resembles a preyfish. That’s when I turn to Northland’s Mimic Minnow Jigheads.

My rod for this slow steady swi 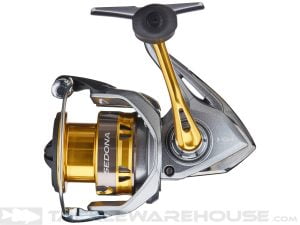 mming retrieve is a 15 year old medium power 7′ Shimano “V” series spinning rod no longer in production but the Shimano Curado rod is a good alternative. Although listed as a “fast action” the rod flexes through the upper 1/2 of the blank and features a power butt. Rather than being “fast” this rod is actually a “moderate” taper, performing like a crankbait rod for grubs. It allows smallmouths to inhale the bait fully while the angler is constantly reeling. A secure hookup is accomplished due to the slight delay of a sweeping hookset. Hanging under the rod is a Shimano Sedona Reel spooled with 10 lb braid and a five-foot leader of 8 lb Gamma Polyflex. Together it makes the perfect outfit for early spring grubbin’!

ARE YOU BURNED OUT FROM FISHING