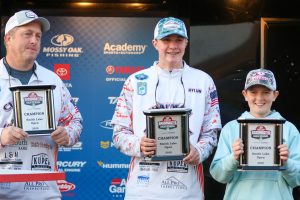 Bradley and Greene edged out Brody Hopper and Landon Franks from Cullman High School by an ounce for the victory. The duo sat on the hot seat for most of the afternoon, and Bradley said he was thinking each bag might be the one to knock them off.

The duo used their experiences on their home lake, Lake Hartwell, to guide them through the tournament day.

“We were out there today and Alex goes, ‘This reminds me of Lake Hartwell,’” Greene said. “That’s sort of what we took it as and went with it.”

The week did not start out promising for Bradley and Greene, however, as motor problems limited practice time Friday morning.

After Bradley and Greene decided to stay for the tournament, Mark took the boat to Fredrick’s Marine and fixed the fuel pump among other things. With a properly working motor, they took off on Sunday morning and headed to the first spot they found on Friday and caught all of their bass off that one spot — three spotted bass and two largemouth, in 20 to 30 feet of water.

“We caught them mainly on a Senko, but we caught a few on a drop shot and underspin,” Bradley said. “I was dragging the Yamamoto Senko and then deadsticking it, and that’s when they would bite it.”

Hopper and Franks did not practice prior to tournament day, but managed to catch four keepers for 12-10 to achieve their goal of qualifying for the National Championship. They also claimed the Phoenix Boats Big Bass with a 4-14.

Franks said they utilized Ned rigs much of the day, and also caught several good fish around brush and docks using ChatterBaits.

“I honestly didn’t think we would finish Top 5,” Hopper said. “We surprised ourselves. This lake is my backyard, so this is where we come the majority of the time. We knew we could scrounge up a couple fish.”

Eli Stevenson and Ben Freeman from Grundy County High School finished third with 11-15 and joined 25 other teams in qualifying for the 2020 National Championship.

Sunday’s tournament was hosted by the Cullman Area Chamber of Commerce.

Tournament note: High school competitors wore small ribbons on their hats and jerseys to support the high school teammates and their boat captain from Obion County who are missing on Pickwick Lake as well as family and friends of those anglers.