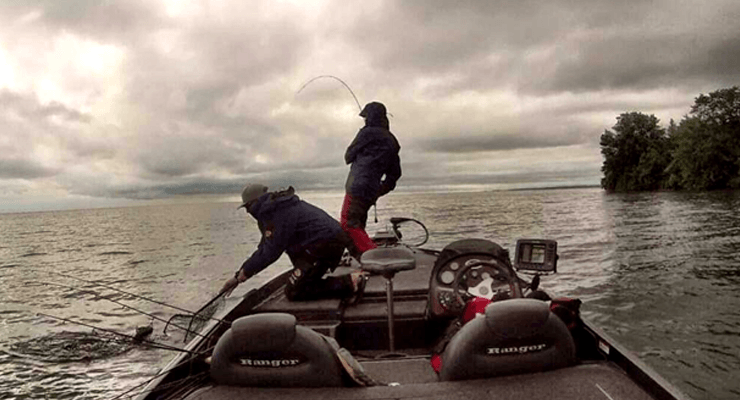 GET THE NET!! We’ve all said it or have gone fishing with someone who has said it. Shoot, sometimes we even scream it like a war cry going into battle! Those three; three letter words. We just can’t help it, once we feel our lure get bumped followed by a “no way is that fish getting off” hook-set, it just becomes second nature to let your partner know to drop everything right this second no matter what, and rush to aid you in landing your lunker. But are you using the proper net and technique to land that trophy fish?

Let’s focus on net selection for all you Bass and Walleye anglers. First thing I look for when purchasing a new net is the mesh. I want a net with a deep pocket and smooth knotless rubberized mesh with a flat bottom design; the flat bottom will help support the entire length of the fish and evenly distribute the weight of the fish so it isn’t curled up awkwardly at the bottom. The smooth knotless rubberized mesh will help reduce the risk of damage to the fishes scales and fins, it also keeps treble hooks from becoming tangled up in the mesh resulting in less damage to the fish while it thrashes around inside. The end result is less time handling the fish out of the water especially if you intend to release it. Another great feature to look for in a net is to find one with the mesh attached within the hoop opposed to being wrapped around. This will extend the life of the mesh and keep it from fraying or being cut from scraping against rocks or from being stepped on repeatedly.

Make sure you look for a net with a sturdy easy to use telescoping handle, the last thing you want to do while netting a fish is fumbling around to extend it. I like to use a net with a long handle which can be handy for obvious reasons. A good net will run you anywhere from $70-$110. Spending a little more money for a quality net will ensure you get a product that is built with durable materials that can withstand a beating, which in the end means less missed fish and more memories.

Next let’s talk about the actual act of netting a fish. Being a good net man is an underrated skill, you’re the link between the angler and his fish so don’t be the weak link. If you’re fishing with someone new whether in a tournament setting or just for fun, before you even wet a line get familiar with how you guys would like each other to net the fish. Let’s face it, we’ve all blamed the net man for a missed fish… and if you haven’t, well then you’re a good man Ha Ha. Personally I prefer my partner to lower the net into the water near the boat while I guide the fish into the net, this way the fish doesn’t get spooked, and if something happens it’s my own fault. One of the biggest mistakes someone can make is jabbing at the fish as it gets close which could scare the fish and the result would be another violent dive away from the boat with a possibility of breaking off a trophy fish, or you could actually stab the fish knocking the hooks out which would also result in a missed fish.

With all of that being said… there is of course an exception to that rule. Sometimes gut instinct comes into play and you have to react quickly. I can remember in one case where my partner had a good fish hooked during a tournament. He battled the fish for a while and was able to wrestle the fish close enough to the boat that we could see it wasn’t hooked great… well of course this fish decided to get acrobatic and leap through the air. While jumping it was able to gain the upper hand and throw the hook which almost flew back and hooked my partner in the face… with a few curse words he smacked his rod on the other side of the boat in frustration! What he didn’t know is that while he was ducking to miss the bait that was flying at him, I was able to net the fish while it was airborne by taking a swing in the dark at it… I ended up saving my partner the agony of losing a nice fish with my readiness, quick reaction and of course a bit of luck!

This spring while fishing don’t overlook the small things that make a big difference!

Honoring Veterans with Wreaths Across America