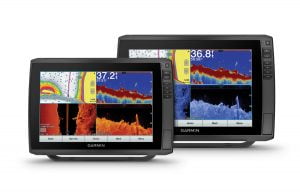 “ECHOMAP Ultra forges the DNA of our popular ECHOMAP Plus series together with premium features of our best-in-class GPSMAP® chartplotters, to deliver an exciting new series that brings professional performance to larger, more affordable display options,” said Dan Bartel, Garmin worldwide vice president of consumer sales. “These new chartplotters are the perfect solution for anglers who want the best sonar and mapping available, but still want the convenience of an all- in-one design that can be quickly installed and removed from the boat at the end of the day.”

These new chartplotters are the first in the ECHOMAP product line to offer both LakeVü g3 and BlueChart g3 cartography products for the U.S. and Bahamas built-in for inland and near-shore boating and fishing. The new g3 maps and charts blend the best of both Garmin and Navionics content together to deliver unparalleled coverage, detail and convenience to users with navigational aids, spot soundings, depth contours, tides and currents, artificial reefs and fish attractors and detailed harbors and marinas. The new g3 cartography also integrates Garmin Auto Guidance, a technology that searches through relevant charts to create a suggested route based upon the user’s desired depth and overhead clearance. For international use, the ECHOMAP Ultra 102sv and ECHOMAP Ultra 122sv are available with a worldwide basemap.
For the most detailed data, the new LakeVü g3 Ultra and BlueChart g3 Vision and accessory cards and downloads are also available for the ECHOMAP Ultra series and, for the first time, offer
new high-resolution relief shading that combines color and shadow to give anglers an easy-to- interpret, clearer view of bottom structure than contour lines alone.”

“Staying connected on and off the water with the ECHOMAP Ultra series is easier than before. On the water, sonar, waypoints and routes can be shared across multiple ECHOMAP Ultra units as well as ECHOMAP Plus 7- and 9-inch units. The new ECHOMAP Ultra series also has NMEA® 2000 connectivity and support for heading sensors, autopilots, digital switching and more. And thanks to built-in Wi-Fi®, anglers can take advantage of the free all-in-one Garmin ActiveCaptain® mobile app that creates a simple yet powerful connection between a compatible mobile device and an ECHOMAP Ultra. ActiveCaptain allows users to update and purchase maps and charts from the OneChart™ storefront on a mobile device anytime, reference the ActiveCaptain community for marina and other points of interest details, access to Quickdraw™ Community data and more.

The ECHOMAP Ultra series is expected to be available in Q2 2019 with suggested retail prices ranging from $1599.99 to $2799.99. For more information, visit garmin.com/marine.
Garmin is the world’s leading marine electronics manufacturer3 and was recently named Manufacturer of the Year for the fourth consecutive year by the NMEA, an honor given to the most recognized marine electronics company for support of products in the field. Garmin’s portfolio includes some of the industry’s most sophisticated chartplotters and touchscreen multifunction displays, sonar technology, high-definition radar, autopilots, high-resolution mapping, sailing instrumentation, audio, entertainment and other products and services that are known for innovation, reliability, and ease-of-use. Other Garmin marine brands include FUSION Entertainment, Navionics–a premier supplier of electronic charts, and EmpirBus.

There’s A New Craw In Town