The Rookie of the Year title annually goes to the FLW Tour rookie who has the highest year-end point total in the standings at the conclusion of the regular season. Johnston secured the crown on the final event of the season at Lake Champlain last week, finishing the tournament in 5th place and qualifying for his first Forrest Wood Cup championship appearance.

“I’d looked at it (fishing the Tour) for the past couple years and have been fishing the Costa FLW Series,” Johnston said. “I didn’t want to make the jump to the Tour until I was financially ready. I’ve got my career set up with my job at home where I can do this now. I didn’t want to be living in my truck and going paycheck to paycheck. I wanted to be able to fish to win.”

Johnston debuted as a professional with a third-place finish on Lake Okeechobee in Clewiston, Florida, and never looked back. He followed up Okeechobee with 12th- and 25th-place finishes in the following two tournaments on Lake Hartwell in Anderson, South Carolina, and Beaver Lake in Rogers, Arkansas, respectively.

“A lot of the lakes fit right into my wheelhouse,” said Johnston. “I love bed-fishing, and Hartwell and Beaver set up perfect for me.”

The Tour then headed to the T 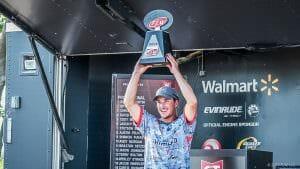 ennessee River for events on Pickwick and Kentucky lakes. Johnston’s pace slowed a bit with 61st- and 40th-place finishes, but he still rolled into Plattsburgh for the finale with a commanding 102-point lead. He wrapped up the season with the 5th place finish and won the title by nearly 200 points.

A unique advantage that Johnston had throughout the rookie season is his brother and fellow Tour rookie Cory Johnston, of Cavan, Ontario, who finished second in the ROY standings. The brothers team up during practice periods.

“We work together and try to break down a lake quicker,” Chris explained.  “We try to split up the water so we aren’t fishing each other’s fish, and it helps big time if he’s on one end of the lake and has a pattern going. If he’s catching them on a jerkbait off deep points, we’ll share that stuff.”

The top five rookies on the 2016 Walmart FLW Tour were:

The Walmart FLW Tour Rookie of the Year title is determined by the total accumulated points from six regular-season events. Two hundred points are awarded for a win, 199 for second, 198 for third, and so on.

The next tournament for Johnston will be the 2016 Forrest Wood Cup Championship presented by Walmart held on Wheeler Lake, August 4-7 in Huntsville, Alabama.

Coverage of Johnston’s Rookie of the Year win on Lake Champlain will be broadcast in high-definition (HD) on NBC Sports Network (NBCSN) Oct. 12 from 1 p.m.-2 p.m. EDT. The Emmy-nominated “FLW” television show airs on NBCSN, the Pursuit Channel and the World Fishing Network and is broadcast to more than 564 million households worldwide, making it the most widely distributed weekly outdoors-sports television show in the world.

For a full schedule of events, complete details and updated information visit FLWFishing.com. For regular updates, photos, tournament news and more, follow us on Facebook at Facebook.com/FLWFishing and on Twitter at Twitter.com/FLWFishing.

Missile Baits has a New Craw

The Top 100 Family-Friendly Places to Fish and Boat