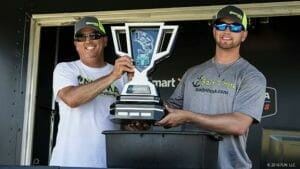 , 2016) – The Enigma Fishing-sponsored duo of Jesse Tacoronte and Adam Santanoff brought a five-bass limit to the scale Tuesday morning weighing 17 pounds, 2 ounces to win the second annual ICAST Cup presented by FLW bass-fishing tournament on Lake Toho. For their victory, the duo each earned trophies to take home and the title of ICAST Cup Champions.

The event marked the kickoff of ICAST, the largest sportfishing trade show in the world. The tournament launched out of Big Toho Marina in Kissimmee, Florida, and featured 62 teams competing for bragging rights and to raise money for the KeepAmericaFishing™ foundation. Each company that sponsored a boat donated a minimum $100 entry fee to the foundation in order to compete. After the final fish had been weighed Tuesday, $6,000 was raised for the KeepAmericaFishing™ foundation.

“I think we were the first boat in the fleet to catch a fish,” says Tacoronte. “Within a minute and a half we had a fish in the boat – a 4-pounder. Twenty minutes later we had that one that was almost 6 [pounds] in the boat. We were using an Enigma 7-3, medium-heavy Phenom Series to fish outside grass edges.”

Swimming a Zoom Magnum Speed Worm with a 1/4-ounce weight was the key to the Enigma team’s victory.

“That thing imitates a needlefish,” Tacoronte adds. “That’s why the big ones eat it. That’s the primary forage out here for big fish. You won’t get many bites, but you’ll get big ones.”

Tacoronte and Santanoff focused on four key grass beds that Tacoronte says he fished about a month ago when he won a previous bass tournament on Toho. The grass has matured since then, so the anglers backed off to slightly deeper water and worked the worm with a steady retrieve in the middle of the water column for fish suspended up in the grass.

The duo’s largest bass, a 5-pound, 13-ounce largemouth, also earned them the Costa Big Bass Award, including t-shirts and a free pair of Costa sunglasses.

The top 10 teams finished the tournament in:

Complete results for the tournament will be posted at ICASTCup.com.

Photos from the event can be found at FLWFishing.com.

With the GoFree Hooked app, you can record your catches by saving fish photos, catch locations, fish details, and notes about each catch, and then share that information with family and friends via text, email or social media. Add a whole new dynamic to your fishing trip by challenging friends, family or anglers from the worldwide GoFree Hooked user community to a tournament competition, and then follow the action via a live leaderboard. For more information about the GoFree Hooked app, visit GoFreeMarine.com.

KeepAmericaFishing™ is leading the fight to preserve your right to sustainably fish on our nation’s waterways. As the voice of the American angler, KeepAmericaFishing works to keep our public resources – our oceans, lakes, rivers and streams – open, clean and abundant with fish. For more information, please visit KeepAmericaFishing.org.

For more ICAST 2016 coverage, details and tournament information visit FLWFishing.com. For regular updates, photos, tournament news and more, follow us on Facebook at Facebook.com/FLWFishing and on Twitter at Twitter.com/FLWFishing.

The Science of Bass Fishing

FLW jumps in to the Mud Hole