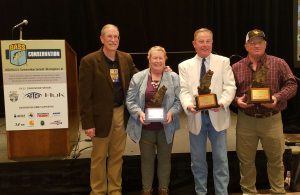 BIRMINGHAM, Ala. — In an unprecedented move, B.A.S.S. Conservation honored three with its highest award at the Conservation Summit held March 6-8 during the Academy Sports + Outdoors Bassmaster Classic presented by Huk.

“Since we host the Conservation Summit only every other year, I decided to present one for last year, this year and next year, all at the same time,” Gilliland explained. “I wanted to recognize all three of these people for their great work.

New York’s Barb Elliott has gained both national and international notoriety for her expertise regarding fish care, notably barotrauma and fizzing.

“Barb taught all 75 Bassmaster Elite Series pro anglers how to properly fizz smallmouth bass during three days of training in Waddington, N.Y.,” Gilliland revealed. “That training resulted in a significant increase in the live release rate of bass compared to other area tournaments.”

Elliott gives seminars on fish care and fizzing to groups of anglers at every level, from high school to pro, in both the U.S. and Canada. She helps on the B.A.S.S. Yamaha/AFTCO Live Release boats during New York tournaments. She has also been featured in several videos about barotrauma and fizzing. As a fundraiser for the New York B.A.S.S. Nation, she makes and sells “fizz” kits, which include needles, reamers and instructions.

Elliott emphasized that she was both “honored and humbled to be included in a group of amazing, accomplished people.”

“B.A.S.S. and its Conservation arm do so much on behalf of fishermen and fisheries,” Elliott continued. “I am so proud to be involved in keeping our angling access available for all.”

North Carolina’s Bill Frazier, a water quality specialist and educator, also has made a name for himself in terms of fish care. For the past 11 Bassmaster Classics, he has assisted with safely transporting bass from the weigh-in site back to the fishery.

“Bill is the guy hidden under the stage,” Gilliland said. “He volunteers for this duty every year despite cramped and noisy conditions.”

Among his most noteworthy achievements in North Carolina are the creation of “fishing trails” at several bass fisheries. They’re the angling equivalent of golf courses, with each “hole” enhanced with habitat and information regarding the preferred season and lures to fish it.

“As a Lowrance Electronics pro-staffer, Bill mapped the lake bottoms and determined the best locations for the structures,” Gilliland explained. “He also does seminars on sonar techniques at local tackle shops and sporting shows.”

Additionally, Frazier is a champion for access issues and an outspoken critic of illegal fish introductions such as the illegal introduction of Alabama bass into North Carolina and Tennessee fisheries.

Frazier pointed out the winners could not have been successful without a team effort from fellow B.A.S.S. members.

“No person is talented enough to do this on his own,” Frazier said. “Since we are not funded, much of what we do is on pure initiative. But we feed on each other.

“I learn from all the others, and I hope they are gaining useful information from me.”

Compared to Elliott and Frazier, who both have been leading their state’s conservation programs for a dozen years, Jake Davis is a relative newcomer to the conservation director position, with only two years at the helm. By recruiting youth to help with cleanup and habitat efforts in his state’s fisheries, the retired military vet and 40-year member of B.A.S.S. has quickly brought the Tennessee B.A.S.S. Nation to the forefront for activism.

“Seeing that my actual background is not fisheries or wildlife, it was a great honor for me to stand with two legends as a co-winner,” said Davis. “They may not realize it, but both Barb and Bill helped me greatly, both with their knowledge and by reading about their past achievements.”

“One of his biggest passions is working with kids,” Gilliland said. “Jake gets things done in a lot of places.”

One of his most notable achievements included a collaborative habitat enhancement project on Tims Ford Lake, assisted by funding from an AFTCO/B.A.S.S. Nation Conservation Grant.

Finally, Joan Blankenship received the FOR award from the Reservoir Fisheries Habitat Partnership for her ongoing efforts to restore eelgrass to Virginia’s Claytor Lake and, in the process, creating a valuable nursery source for vegetation that can benefit bass fisheries in the entire Mid-Atlantic area.

“I got involved in this a long time ago, and it’s my passion,” said the longtime Virginia Conservation Director who has earned grants from AFTCO, Shimano, Aquatic Ecosystem Restoration Foundation and Friends of Reservoirs, as well as  partnered with Virginia Tech and others. “You have to stick to it, and it takes a long time to build relationships.”

Meeting to Decide Whether or Not to Shut Down Recreational Fishing

Free Days at These Wildlife Refuges

For the Love of Bass