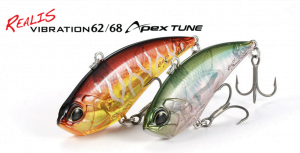 As many of you know we made an introduction on the NEW Apex Tune lipless cranks.

I’m excited to circle back and address this project in complete fashion.

The APEX Tune project came from research I conducted about 15 years ago. The hypothesis was simple, a lipless crank could be used for more than a search bait. Second, because the lure’s natural profile and natural movement, it could be used throughout the calendar year instead of traditional pre spawn and fall time frames. Years ago it intrigue me that angler majority believed that lipless cranks were season specific.

Why couldn’t this type of lure be fished longer in the calendar year? During one part of the research, addressing fish behavior. It was documented that bass will change dramatically and behaviorally to a lipless lure action and sound. During initial testing, many models possessed the potency to catch fish in pre-spawn/fall conditions through sound and vibration. However, it was also ascertained that these sounds and vibrations had lesser impact as conditions changed. What was nice about this long intensive study is that as bass became more active, when water hit ideal temps, water transparency increased, and traditional baitfish flourished. Some observations showed bass in pursuit of the lure, then the same bass would depart from tracking the lure. Other observations in heighten feeding episodes would visual show bass chasing down the lure and with a closed mouth hitting the lure in gill plate region. By making lure modifications (using the same profiles) I could change the predatory response favorably.

The conclusion was that the same test subjects (bass) could be incited to strike and eat the lure. Some profiles, some movement and some sounds increased the ability for the bass to eat the lure but as I re-entered the pre-spawn season again the bass would move back to choosing the traditional lipless actions and sounds. This was significant and valuable information. Later through lure modification (drilling holes in the lure replacing components and changing running action and weight specifications I was able to get bass to strike and eat the lure modifications at the same rate or better than that traditional lures (during prespawn) but even more important these same bass would eat the mod-lure longer in the calendar year. 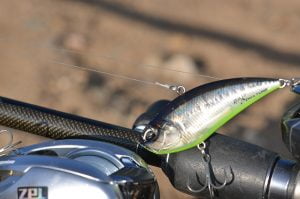 Aaron Martens and I decided to dive into this project Choosing to use the already established Vibration 68 & 62 profile. One reason is because instantly we could change vibration and percussion. Second, we liked the profile of this lure, it can be eaten by all sizes of bass. It’s shape allow it to shed water differently and it had a unique hooking clearance making it easier to retain bass.

Aaron Martens, as well as myself are extremely excited about this project. It combines solid convincing data with unprecedented angling experience with clear apparent outcomes.

The end result has been very successful field testing (testing on multiple and varied locations for both Largemouth and smallmouth).

So how successful was the Apex Tune project? In one field test. I had the opportunity to fish with 3 established Pro/ AM winners /top finishers. Each one of these anglers chose their lipless crank for the pre-spawn time. Conditions also included 18 inches of water visibility.

I used the APEX Tune prototype which had an extremely clear (translucent) body (more difficult to see). The goal was to determine the effectiveness of the Apex Tune. After 3 days of testing the results were overwhelming. The APEX Tune outperformed the other cranks in catch ratio, size of fish and detection. And it accomplished this with a translucent body in dingy water!

The conclusion is this lure is not a regular lipless crank, giving tournament anglers a clear advantage. Its draw power is impressive and catch ratio was significant. This lure will catch bass in tournament situations effectively and will be able to accomplish this throughout the calendar year. I am personally very excited about projects like this. It gives DUO an opportunity to showcase our background, knowledge and innovation. I hope each of your will take me up on the offer to use this lure and you will immediately see clear differences in this lure’s functional.