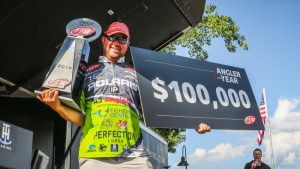 You don’t have to look at David Dudley’s resume to know how good he is, though, it doesn’t hurt. A FLW Cup title, five FLW Tour titles and three FLW Tour Angler of the Year titles – oh, and over $3.6 million in career earnings. Mind-boggling stats, no doubt.

Today, Dudley made that resume a bit more impressive by making history when he clinched his fourth AOY title on one of his favorite lakes to fish. Making the moment even more sweet, he also sits in the top 10 of the final event of the Tour season, so brace yourself for another potential resume update Sunday.

Of course, they say you never forget your first and that certainly is the case for Dudley.

“When I won my first Angler of the Year title in 2008 nobody interviewed me, nobody talked to me, I didn’t have articles written about me, I was that far down in the standings – I think I was in 17th heading into the last tournament,” says the Lynchburg, Va., pro reflecting on the run up to his first AOY title. “Of all people, Andy Morgan had a monstrous lead going into it and he just don’t stumble, and he stumbled.”

It’d take just a few years for the Polaris pro to add two more titles and oddly enough, Dudley’s last AOY title was won here on Lake Champlain in 2012 – and he actually won the event to boot. And while it’s not like he’s had a bad year since, the “drought” he went through after winning back-to-back AOY titles in 2011 and 2012 with points finishes in the teens to low 20s did leave himself wondering if he still had it in him. This season he erased any doubt.

“It’s humbling to know I got four of them, but I think on this one, it meant more to me,” Dudley says. “It’s not that I’m old, but I’m 43, and over the last probably five years I’ve still made the Cup, but it’s like, ‘Have I peaked out? Am I cresting going the other way?’ So, I think for this one it separates me from the pack. The other thing is confidence, confidence to say, ‘You know, I ain’t that old. I still got a little bit in me.’ It more for my soul than anything.”

Before this event, Dudley was no lock for Angler of the Year. In fact, he trailed John Cox by one simple point. Behind them sat Buddy Gross, Joseph Webster and Scott Martin, all easily within striking distance. Dudley is as cool under pressure as they come and because of that he just went out and tried to fish the event like it was one of the hundreds he’s fished over his lifetime.

“You can’t strategize for a game when you don’t know how it’s going to unfold,” Dudley says of practicing for Champlain with AOY in mind. “Angler of the Year doesn’t fall in your lap because you do all the prep work, it just kind of goes with the flow. If you do well at every tournament then you’re going to win Angler of the Year. And that’s kind of my motto. I live by the motto ‘Never be satisfied.’ I say it a lot and I think when you become satisfied as an angler, or anything in life, you plateau. It’s a dangerous thing to be satisfied.”

Kicking things off on Sam Rayburn in January, Dudley finished 13th and got momentum rolling quickly. From there, he made another cut on Toho finishing 21st. Seminole was next up and it’d be the one tournament that he’d reflect on throughout the season. He failed to weigh in a limit on day two and settled in 74th. Thankfully, he rebounded at a tough Grand Lake where he’d make another top-30 cut. The trend continued at Cherokee with a 12th-place showing.

Heading to Chickamauga in the spring was when Dudley really began to lick his chops. A top 10 at Chick slid him up to second in the points race and then all his focus turned to Champlain – a venue where his track record is solid. Sure enough, he notched another top 10 this week and ultimately helped him pull away to his fourth title.

“Everybody wants to win Angler of the Year,” he adds. “I think it’s the most coveted title and I think all the fishermen will agree. So, to win it four times, God has just blessed me so tremendously throughout my career. Without him I wouldn’t be where I’m at today.”

As impressive as four AOY titles are, the fact is that Dudley currently sits sixth in the tournament on Champlain with one day left. Can he do what he did in 2012?

“It would be nice to repeat and win AOY and the tournament like I did in 2012, but I’m a realist. A lot would have to fall into place.”

VanDam and Zona on IKE Live