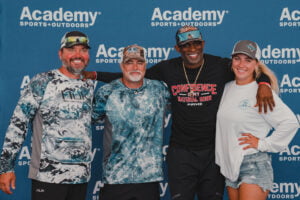 LEWISVILLE, Texas (June 9th, 2021) Academy Sports + Outdoors held its second annual celebrity fishing tournament this week ahead of the 51st Bassmaster Classic in Fort Worth, Texas. Athletes, celebrities, country music stars, and members of the bass community hit the water to battle for the top spot with Deion Sanders’s team edging out the competition to take home the title. The winning team presented their charity of choice, Tiger Fund Athletic Foundation, with a $5,000 check from Academy. All other participants were given $1,000 to their respective non-profits as well.

SEC Network and ESPN reporter Marty Smith kicked off the event on Lake Lewisville Wednesday morning. The six teams were led by pro bass anglers who worked hard to put their teams atop the leaderboard.

Academy is the title sponsor of the upcoming Academy Sports + Outdoors Bassmaster Classic presented by Huk, where 55 of the world’s best bass anglers will compete on the storied waters of North Texas’ Lake Ray Roberts.

Academy is a leading full-line sporting goods and outdoor recreation retailer in the United States.  Originally founded in 1938 as a family business in Texas, Academy has grown to 259 stores across 16 contiguous states.  Academy’s mission is to provide “Fun for All” and Academy fulfills this mission with a localized merchandising strategy and value proposition that strongly connects with a broad range of consumers.  Academy’s product assortment focuses on key categories of outdoor, apparel, footwear and sports & recreation through both leading national brands and a portfolio of 19 private label brands, which go well beyond traditional sporting goods and apparel offerings.