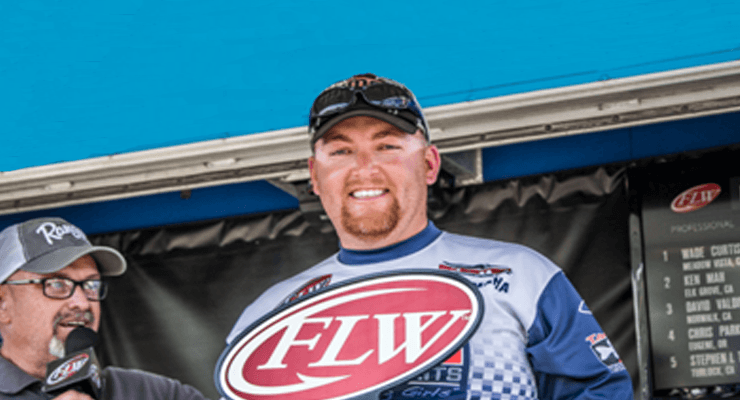 “This has been an amazing tournament,” said Curtiss, who earned the first victory of his career. “After starting the day in 10th place, I knew I’d have my work cut out for me. And I honestly didn’t think that I had enough weight to win it. This is my seventh or eighth tournament that I’ve competed in on the Delta, and to get the win is just so sweet.”

“The first two days I ran my areas and caught a lot of fish – around 50 keepers on day one, and 25 keepers on day two. Today, I just went fishing and ended up fishing a lot of new water. I caught around 20 keepers, and none of my fish came deeper than 6 feet of water all week.”

“In the mornings I would catch them real well on the incoming tide,” Curtiss said. “I would just try to run the high tide each day as long as possible. The key for me was definitely finding the right fish along the grass lines. I knew the fish were there and that’s how I like to fish, so this tournament set up perfectly for me.”

The top 10 pros on the California Delta were:

Valdivia caught the biggest bass of the tournament in the pro division Friday – a monster weighing 10 pounds even – that earned him the day’s Big Bass award of $254.

Jack Farage of Discovery Bay, California, won the co-angler division and a Ranger Z117C with an Evinrude or Mercury outboard motor, with a three-day total of 15 bass weighing 54 pounds, 9 ounces. Farage’s winning margin of 15 pounds, 7 ounces was the third largest co-angler margin of victory in Rayovac FLW Series history.

The top 10 co-anglers on the California Delta were:

Bruno caught the biggest bass of the tournament in the co-angler division to earn the day’s Big Bass award of $169.

The Rayovac FLW Series on the California Delta was presented by Ranger Boats and was hosted by the City of Oakley. It was the second of three Western Division tournaments in 2015. The next Rayovac FLW Series tournament will be a Southeastern Division event presented by Evinrude, held May 21-23, on Lake Seminole in Bainbridge, Georgia. For a complete schedule, visit FLWFishing.com.

For complete details and updated information visit FLWFishing.com. For regular updates, photos, tournament news and more, follow FLW on Facebook at Facebook.com/FLWFishing and on Twitter at Twitter.com/FLWFishing.