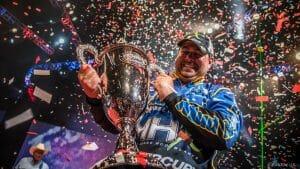 There’s an old saying about the benefits of taking “the road less traveled.” Team Mercury FLW Tour pro John Cox took that saying to heart last weekend at the Forrest Wood Cup on Wheeler Lake in northern Alabama, relying on an aluminum boat and a Mercury motor to get to water that no other competitors could reach.

Professional angler John Cox of DeBary, Florida, brought a five-bass limit to the scale Sunday weighing 11 pounds, 8 ounces – enough to claim the title of Forrest Wood Cup Champion at the Forrest Wood Cup at Wheeler presented by Walmart. Cox went wire-to-wire with a four-day total of 20 bass for 54-13, winning by 4-pounds, 3-ounces over second-place angler Michael Neal of Dayton, Tennessee, and won the $300,000 top cash prize. The tournament featured 50 of the top bass-fishing anglers in the world competing for professional bass-fishing’s world championship.

“It’s been an amazing week,” said Cox, who earned his third career FLW Tour win and pushed his career earnings to more than $920k. “I didn’t think that one spot had enough fish in it to win, but it did. I’ve tried to get back in places like that in other Forrest Wood Cups to win, and it just didn’t work out. But this lake has so many of those little log-infested creeks, and I knew this would be a great opportunity to make it work, and it did.”

Cox’s winning area was located way in the back of Cotaco Creek, seven miles back off of the main river. Cox said that it would take him more than 40 minutes each day to work his Crestliner aluminum boat to the back of the creek, plowing over logs and timber as he made his way to the honey hole.

“That spot was the third creek arm that I checked in practice,” Cox said. “There was layer of duckweed and it looked like a great area to throw a frog.”

The Mercury pro said, “I’m afraid my sponsors are going to fire me after they see where I took this boat and motor,” Cox joked as he surveyed the dents and dings on his blue-and-yellow aluminum sled, and the nicks in his Tempest Plus 23 propeller. “I knew I had a pretty good shot at winning if I could get to the fish, but there’s absolutely no way I could’ve made it where I needed to go running any other boat and motor.”
Cox said that he caught the majority of his fish throughout the week on a black- or bluegill-colored Jackall Iobee Frog on an MHX FP-885 rod. He also caught a few fish on a white ¼-ounce buzzbait and a Yamamoto Senko.

“The fish were definitely chomping the frog,” Cox said. “I was skipping it as far as I could under the trees into the shade.

“The key for me this week was definitely my aluminum boat and Mercury outboard,” Cox went on to say. “I would not have been able to get as far back into the creek and catch them out of that spot if I had been in a fiberglass rig.”

With his $300,000 victory, Cox made fishing history becoming the first pro to ever win a modern world championship bass-fishing tournament from an aluminum boat.

For the first two days, Cox relied primarily on a Jackall Iobee Frog in either a black or bluegill color. He used an MHX FP-885 rod to skip the frog far up under shade trees and worked it through the thin duckweed.

On day two, his action was not as fast paced, but the fish still cooperated. He had to mix in a white 1/4-ounce buzzbait fished on an MHX MB-873 to entice a few more bites to cull up to 15 pounds, 10 ounces. Cox went into Saturday’s top-20 round with a 6-pound, 7-ounce lead.

By day three, Cotaco Creek began to tighten the reins on the Tin Man, giving up just 11 pounds. His own fishing pressure in the small area had begun to take its toll. In addition, a rise in water level took away his aluminum advantage, as other anglers were able to get farther back in the creek.  John also said he landed several fish on a Yamamoto Senko

Finishing runner-up, Michael Neal targeted schooling bass with a Lucky Craft Sammy as well as a Gunfish. Perhaps more important than the actual bait, Neal tipped his clear-colored topwaters with a feathered treble to better mimic the small baitfish in the area. Neal also threw a Carolina rig with a 6-inch Big Bite Baits Finesse Worm.

6. Mark Rose fished uncharacteristically shallow for sixth. He says he relied on an 8-inch Strike King Bull Worm Texas-rigged with a 5/16-ounce weight, a 3/8-ounce buzzbait with a toad trailer and a 1/8-ounce shaky head with a 6.5-inch Strike King Finesse Worm (morning dawn).

7. As usual, Jacob Wheeler was fishing shallow on the final day of the Forrest Wood Cup. He used an Accent Lures Game Changer Buzzbait (large blade) with black or white toads and a 9/16-ounce ENR Jig (magic craw) trailered with a Gene Larew Wheeler’s Punch Out Craw (Minnesota flash).

8. Walmart FLW Tour Rookie of the Year Chris Johnston caught his fish on an Evergreen SB 105 and a 4-inch Zoom Fluke.

Overall there were 48 bass weighing 106 pounds, 12 ounces caught by pros Sunday. Nine of the final 10 anglers weighed in five-bass limits.

The 2016 Forrest Wood Cup at Wheeler Lake presented by Walmart was hosted by the Huntsville/Madison County Convention and Visitors Bureau.

Coverage of the Forrest Wood Cup will be broadcast in high-definition (HD) on the NBC Sports Network (NBCSN) when “FLW” airs October 18 from 1 p.m.-2 p.m. EDT. The Emmy-nominated “FLW” television show airs on NBCSN, the Pursuit Channel and the World Fishing Network and is broadcast to more than 564 million households worldwide, making it the most widely distributed weekly outdoors-sports television show in the world.

For a full schedule of events, complete details and updated information visit FLWFishing.com. For regular updates, photos, tournament news and more, follow us on Facebook at Facebook.com/FLWFishing and on Twitter at Twitter.com/FLWFishing.

Grundens Ambassador Makes a Big Splash at the Big O