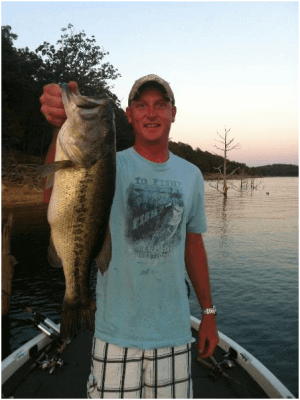 Clay Wilson was due for a new truck. In fact, just three months ago the Rogers, Ark., resident was kicking tires and comparing options on the latest models when something told him to hold off for a while. It’s just as well because Wilson was the winner of the Toyota All-Star Fan Favorite Angler Sweepstakes and a new 2014 Toyota Tundra valued at $35,000.

Wilson was among the 14 voters who were randomly selected and virtually paired with the 14 Bassmaster Elite Series pros who earned their way through points or fan votes to the Toyota All-Star Week and Evan Williams Bourbon Championship, Sept. 27-29, out of Muskegon, Mich.

“I got a call from US Sweepstakes saying I was chosen,” said Wilson, who learned of his pairing shortly before All-Star Week. “When I heard I was matched with Hank Cherry, Rookie of the Year, I thought my odds were pretty good. I knew Ott DeFoe won (All-Star) as a rookie in 2011.” 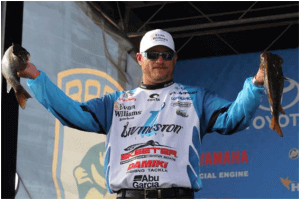 Cherry was entered into All-Star by virtue of his ROY win, but Wilson had been following the North Carolina angler’s progress since the 2013 season began. He had a good idea of Cherry’s talent when he traveled to Tulsa, Okla., earlier this year for the Bassmaster Classic.

“I watched the Classic weigh-in and became a big Hank Cherry fan,” Wilson said. “I’ve been following him a lot this year. I was a little nervous about KVD being in a tournament so close to home, but I still felt good about it and thought Cherry had a good shot.

“When I saw Cherry weigh in and win third at the Classic, I told everybody, ‘You guys, look out. He’s going to be the next great Elite.’ I think he’s a great fisherman and an outstanding guy.”

Wilson was one of many All-Star fans who voted almost daily for his favorite anglers, including Rick Clunn, Brandon Palaniuk and Randy Howell.

“It’s very rewarding to see the passion from our fans when they turn out and vote in big numbers like this,” said Jim Sexton, vice president of digital for B.A.S.S. “The level of support we receive from our fans is evident in the record number of votes we received before All-Star this year. That keeps our sport growing.”

An onsite manager for a storage facility, Wilson followed BASSTrakk each day of All-Star and was concerned the first day when the system showed Cherry on Muskegon with only two fish weighing 5 pounds, 4 ounces.

“I thought that was too much of a deficit to overcome going into Saturday, but when I watched the weigh-in, he finished third,” Wilson said. “My excitement level went through the roof. After Saturday, he had a 4-pound lead, and I thought that was great. Then I found out the weights were zeroed (for the Top 4 on White Lake), so I decided if it was meant to happen, it would happen. Let it fall where it may.”

With that philosophy on the brain Sunday morning, Wilson, who occasionally fishes local tournaments, went on a bass quest himself and had a good day on the water. He caught about 14 fish and was back in time to log on to Bassmaster.com for the weigh-in.

“My family and friends and I were all watching online, and when Dave Mercer said 17 pounds, we all went crazy,” Wilson said. “We had been watching the fish flop on the scales, and it was taking time to read the weights. When we heard, we all jumped up and went crazy. It was a whole lot of fun.”

Every person who cast a vote for their four favorite anglers to go to All-Star Week at Bassmaster.com/vote was entered into a sweepstakes. After Sept. 6, 14 names were drawn, and the Toyota Fan finalists were then each virtually paired with one of the All-Star Week competitors.