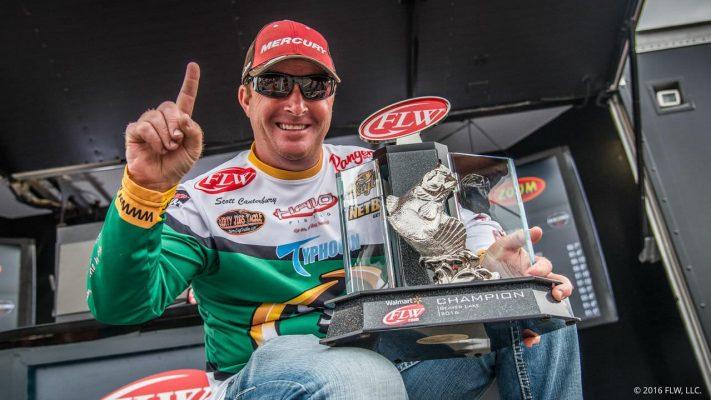 ROGERS, Ark. (April 17, 2016) – In one of the most dramatic finishes in FLW history, Quaker State pro Scott Canterbury of Springville, Alabama, brought a five-bass limit to the scale weighing 17 pounds even to win the Walmart FLW Tour at Beaver Lake presented by Jack Link’s Sunday and the top prize of $125,000.

“Beaver Lake has been pretty special this week,” said Canterbury, who earned the first FLW Tour win of his career and surpassed $1 million dollars in career earnings with FLW. “This lake is fishing so good right now, and the best anglers in the world were right behind me. I knew that I was going to have to catch 15 pounds today to even have a shot, and to go out and catch 17 – I have truly been blessed.”

Canterbury won the tournament by covering new water each day in pockets and coves up the White River.

“Every tournament here for the past three months has been won on the lower end of the lake, in the dirtiest water,” Canterbury said. “I fished down there a bit on the first day, but I’m more comfortable with where I’ve fished the last eight times that I have been here and that is up the river.

“I went up there after lunch on day one and caught a couple of decent fish, so I decided to put all of my eggs in that basket,” Canterbury continued. “There wasn’t as much pressure there, and the key to Beaver Lake is being able to run new water each day.”

“I started this season with one of the worst tournaments of my career at Lake Okeechobee, and my goal here was to battle back and earn some solid points towards qualifying for the Forrest Wood Cup in my home state,” Canterbury went on to say. “To finally win one of these is unreal.”

The top 10 pros finished the tournament:

Overall there were 50 bass weighing 141 pounds, 9 ounces caught by pros Sunday. All of the final 10 pros weighed in five-bass limits.

Joey Cifuentes of Clinton, Arkansas, won the co-angler division and $25,000 Friday with a two-day total of nine bass weighing 25 pounds, 12 ounces, followed by Mike Devere of Berea, Kentucky, who finished in second place with 10 bass weighing 23 pounds, 6 ounces worth $7,500.

In addition to casting for top awards of up to $125,000 cash in the pro division and up to $25,000 cash in the co-angler division, anglers are also competing for valuable points in hopes of qualifying for the 2016 Forrest Wood Cup, the world championship of bass fishing. The 2016 Forrest Wood Cup will be in Huntsville, Alabama, Aug. 4-7 on Wheeler Lake.

Coverage of the Beaver Lake tournament will be broadcast in high-definition (HD) on NBC Sports Network (NBCSN) September 14 from 1 p.m.-2 p.m. EST. The Emmy-nominated “FLW” television show airs on NBCSN, the Pursuit Channel and the World Fishing Network and is broadcast to more than 564 million households worldwide, making it the most widely distributed weekly outdoors-sports television show in the world.

For complete details and updated information visit FLWFishing.com. For regular updates, photos, tournament news and more, follow us on Facebook at Facebook.com/FLWFishing and on Twitter at Twitter.com/FLWFishing.

Queen is the New King of Kayak Fishing