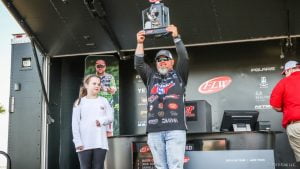 “I’m ecstatic. It has been an awesome, awesome journey. To beat the competition that we have – it’s unbelievable,” said Gross, who earned his second career FLW Tour victory. “I came into this event just wanting to cash a check. When I made the top 30, I just wanted stay in the top 10. All I wanted to do was finish strong.

“I got the majority of my weight early today – I’m guessing I had 18 or 19 pounds by 9 (a.m.) and after that it was a grind,” continued Gross. “I worked a long time between bites, but I upgraded two more times – maybe three – at my spot. I can’t believe this place that I caught these fish at held up – I really believe the Lord just blessed me.”

The spot Gross is referring to was on the main span of Lake Toho, just north of the lock at the lake’s southern end. It was his most productive area throughout the event, producing 19 of his 20 fish. He described it as a “pocket” in the grass line that was 30 feet wide and 50 feet in, but that didn’t break through to the other side.

“It was special because it had two ditches with clumps in the middle, and the fish were sitting in the clumps,” said Gross. “There were 20-foot gaps between each clump, and they’d set up in them [the clumps]. The first day I caught them, it was in the ditch, but after that, everything was on the clumps.”

Looking for a bass guide in Florida?  Check here

Though Gross described the area as having two ditches, he said the “ditches” weren’t any deeper than the surrounding area. They were just open lanes with no grass. The entire spot was about 7 feet deep.

Gross primarily used a 5- or 6-inch, natural-light-colored Scottsboro Tackle Co. Swimbait on an 8/0-sized Owner Beast Flashy Swimmer and a ½-ounce white custom swimjig with a 4-inch Scottsboro Tackle swimbait trailer of the same color. The same swimjig with a black-and-blue skirt and a green-pumpkin Zoom Z-Craw trailer also came into play. For line, he used 50-pound-test braid on a Daiwa Tatula SV reel. He fished the swimbait on a 7-foot, 3-inch Fitzgerald Rods All Purpose Series extra-heavy rod, but switched to a heavy-action rod of the same length and series for the swim jig.

Television coverage of the FLW Tour at Lake Toho presented by Ranger Boats will premiere in 2019. The exact air-date will be announced soon. The Emmy-nominated “FLW” television show airs each Saturday night at 7 p.m. EST and is broadcast to more than 63 million cable, satellite and telecommunications households in the U.S., Canada and the Caribbean on the World Fishing Network (WFN), the leading entertainment destination and digital resource for anglers throughout North America. FLW television is also distributed internationally to FLW partner countries, including Canada, China, Italy, Korea, Mexico, Portugal, Spain and South Africa.

The total purse for the FLW Tour at Lake Toho presented by Ranger Boats was more than $860,000, including $9,000 through 65th place in the Pro Division. The tournament was hosted by Experience Kissimmee and the Kissimmee Sports Commission. The next event for FLW Tour anglers will be the FLW Tour at Lake Seminole presented by Costa, in Bainbridge, Georgia, March 7-10. The tournament will be hosted by the Bainbridge Convention & Visitors Bureau.

In FLW Tour competition, the full field of 170 pro anglers competed in the two-day opening round on Thursday and Friday. The top 30 pros based on their two-day accumulated weight advanced to Saturday. Only the top 10 pros continued competition Sunday, with the winner determined by the heaviest accumulated weight from the four days of competition.

Proving the Fish Don’t Know How Old You Are

Pelican Gets a New GC