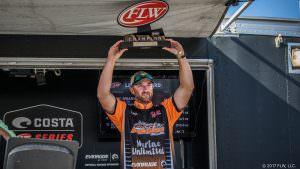 LAKEPORT, Calif. (Sept. 30, 2017) – Boater Bryant Smith of Castro Valley, California, brought a five-bass limit to the scale Saturday weighing 12 pounds, 8 ounces to lead the event wire-to-wire and win the Costa FLW Series Western Division event on Clear Lake presented by Evinrude. Smith’s three-day total of 15 bass weighing 53 pounds, 15 ounces, was enough to earn him the win by an 8-pound, 6-ounce margin and the first place prize package worth $76,271, including a new Ranger Z521C with a 200-horsepower Evinrude outboard.

“Believe it or not, I didn’t sleep much last night,” said Smith, who earned his first career Costa FLW Series win as a boater after four prior top-10 finishes. “I had a 6-pound lead to start the day, but we’re on Clear Lake and that’s one fish here. I knew the caliber of anglers that were behind me and I knew that they were going to catch them. To come out of here today with my first win is pretty special.”

Smith said that he caught all of his fish throughout the week on a green-pumpkin and watermelon-colored Yamamoto Senko, wacky-rigged with a 3/32-ounce nail weight in the tail.

“I was fishing docks all over the lake, as many as I could hit, casting to every single piling,” Smith said. “I think the key for me was my efficiency – precision casting with a Dobyns Champion 734C rod. I was fishing slow, but doing it very fast.”

Smith estimated that he caught around 80 to 90 keepers on the Senko throughout the week.

“I’m usually the guy who throws reaction baits,” Smith said. “I’ve gotten my butt kicked so many times by guys slowing down and throwing Senkos. I put that one rod in my hand this week and pitched to every dock piling that was in front of me.”

The top 10 pros on Clear Lake were:

David Maes of Sparks, Nevada, caught a bass weighing 9 pounds even Friday to win the Boater Big Bass award of $200.

The top 10 co-anglers on Clear Lake were:

Hardin also caught the biggest bass of the tournament in the Co-angler Division Friday, a largemouth weighing 8 pounds, 5 ounces, and earned the day’s Co-angler Big Bass award of $133.

FLW is the world’s largest tournament-fishing organization, providing anglers of all skill levels the opportunity to compete for millions in prize money in 2017 across five tournament circuits. Headquartered in Benton, Kentucky, with offices in Minneapolis, FLW conducts more than 258 bass-fishing tournaments annually across the United States and sanctions tournaments in Canada, China, Mexico, South Africa and South Korea. FLW tournament fishing can be seen on the Emmy-nominated “FLW” television show, broadcast to more than 564 million households worldwide, while FLW Bass Fishing magazine delivers cutting-edge tips from top pros. For more information visit FLWFishing.com and follow FLW at Facebook, Twitter, Instagram, YouTube and Snapchat.