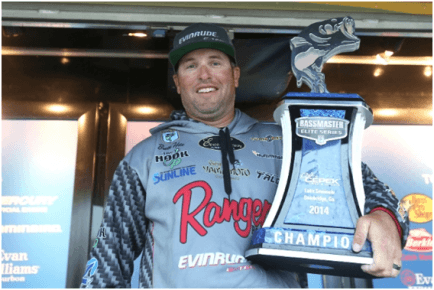 The Phoenix, Ariz., pro’s name is now alongside Derek Remitz’s in the history books as the only Elite Series rookies who have walked away with the trophy in their debut events.

Hite’s prize was $100,000 and an automatic berth in the 2015 Bassmaster Classic on Lake Hartwell in South Carolina.

“I’m pretty excited because Lake Hartwell is one of my favorite lakes,” Hite said. “Going into this season, getting to the Classic on Lake Hartwell was a goal. But I’m still going into the rest of the season by putting my head down and practicing hard and fishing hard.”

Ending up in third at 80-9 was Mark Davis of Mount Ida, Ark. Fourth place was taken by the 2004 Classic champion, Takahiro Omori of Emory, Texas, with 78-4. Finishing fifth was Kevin Short of Mayflower, Ark., with 76-6.

To take his win, Hite targeted hefty female prespawners staging along stretches of grassy banks. With his boat positioned in 6 to 8 feet of water, he was close enough to the bank to have been able to cast and hit it. He cast to the edge of the grass.

The icing on his final day was hooking into a 7-13.

“I set the hook, and I was thinking, ‘Man, I hope this isn’t a tree.’ Then I saw my line coming toward me. It was the biggest fish I’d caught all week, and it came at the right time. It was pretty special,” he said. “I just knew that was the dagger.”

Hite achieved his hefty final-round weight despite a short competition day. A heavy storm front approaching the lake prompted Bassmaster officials to bring the 12 finalists off the water at 1 p.m. ET instead of 3:45.

Hite’s go-to lure all four days was a Z-Man ChatterBait, a bladed swim jig, in 3/8- and 1/2-ounce sizes depending on whether the grass was low or high in the water column. He said he caught most of his bass on the green pumpkin color, but he also used black-and-blue version in the morning or to give the bass something new to look at.

His trailer was usually a 4 1/2-inch swimming Gary Yamamoto Senko trailer in either green pumpkin with a dyed chartreuse tail, or in black-and-blue.

Although technically a Bassmaster Elite Series rookie, Hite has a 13-year history of competing in major tournaments. His Sunday victory was No. 2 for him in as many months; he won in Florida last month on another circuit.

Hite’s 2015 Classic qualification is his third. He competed in the 2000 Classic, qualifying through what was then the Western Invitational series and again in 2004 through the Top 150 tour before the Elite Series was created in 2006.

“The Classic is the biggest tournament in the world,” he said. “And the time period of the Classic (February) is when I excel, during the prespawn. I’m looking forward to it.”

Bonuses earned at the Lake Seminole event include:

* Toyota’s $1,000 bonus to the leader in the Toyota Bassmaster Angler of the Year points race: Brett Hite

* Livingston Lures Leader Award of $500 for heading up the leaderboard on the second day: Brett Hite.

* Power-Pole Captain’s Cash Award of $1,000 to the highest finisher equipped with Power-Poles: Faircloth

The local host of the Elite event was the Bainbridge-Decatur County Chamber of Commerce (http://www.bainbridgegachamber.com).

The Elite Series heads next to the St. Johns River out of Palatka, Fla., with takeoffs and weigh-ins at Riverfront Park in downtown Palatka. The competition days are Thursday-Sunday, March 20-23.

About B.A.S.S.
B.A.S.S. is the worldwide authority on bass fishing and keeper of the culture of the sport. Headquartered in Birmingham, Ala., the 500,000-member organization’s fully integrated media platforms include the industry’s leading magazines (Bassmaster and B.A.S.S. Times), website (Bassmaster.com), television show (The Bassmasters on ESPN2), social media programs and events. For more than 45 years, B.A.S.S. has been dedicated to access, conservation and youth fishing.