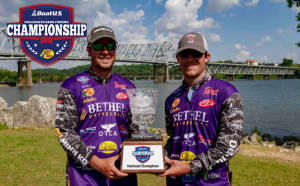 FLORENCE, AL (May 24, 2019) – “First feeling, man it’s awesome. To do it one time is a big deal, but to do it twice is even bigger,” said Carter McNeil of Bethel University. For the first time in the history of the BoatUS Collegiate Bass Fishing Championship presented by Bass Pro Shops, a school has repeated as champions. Not only that, the team that manages to go back-to-back is comprised of the same two anglers. Cole Floyd and Carter McNeil take home the victory this year on Pickwick Lake with 45.65 pounds.

Floyd and McNeil entered this week as one of the key teams to watch. Following day one, they quickly asserted themselves at the top of the leaderboard with over 22 pounds. The pairing worked several key deep water areas, and knew that they were around the fish to win. “We gave ourselves an opportunity to catch a big bag. I really didn’t think we were on what we were on. You know, it all fell in place and we had a good time,” added Floyd.
One of their go-to baits was a purple colored ribbon tail worm. Fishing along deep water structure in 15-25 feet of water, they quickly sacked up a limit. By roughly 10:00 AM this morning, Floyd and McNeil had over 20 pounds of bass in the boat. This mirrors the exact same scene that played out on day one as they struggled to upgrade later on in the day. It proved not to matter, as they were able to ride their morning wave of fish catches to another national title.
Today’s victory not only makes back-to-back titles for Floyd and McNeil, it is also the third time that Bethel has won this particular event. The program has grown into one of the true powerhouses of the sport. At each and every event they enter, teams representing Bethel University are considered to be among the favorites. Today, Cole Floyd and Carter McNeil cemented their place among the best in program history. “When we first came to Bethel University, we knew we had big shoes to fill. Today, we’re fortunate enough to win two times. I can’t say enough about how awesome of a program it is,” said McNeil.

John Cox is on a Roll

The Top 5 in the Cabela’s Collegiate Big Bass Bash