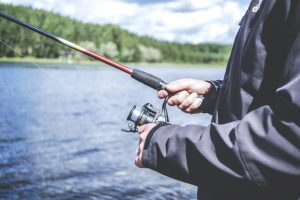 If you are heading down to Australia for a vacation, why not incorporate the unique experience of bass fishing in the land down under whilst you are there. You’ll be sure to have a great time and come back with some stories that will make you the envy of your fisher mates!

You can take your favorite rod with you because it won’t add much weight to your baggage allowance, but you’ll be better off buying hooks and lures when you get there to avoid any problems with the TSA when boarding your flight, or with Customs on arrival.

If you don’t have time to go shopping for a tackle on arrival, you can order them in advance by mail order from specialist tackle retailers like MO Tackle & Outdoors, and have them delivered to your hotel or your travel agent there if you are using one.

Bass fish are widely considered to be the best freshwater fish in Australia to eat, and many refer to these as the ‘Barramundi of the South’. With that being said, they are significantly better eating than the barramundi and are very popular due to their aggression towards a wide variety of lures. Summer is the best time for bass fishing in Australia, with mornings and evenings being the best time to catch them.

Bass can be caught along the majority of the east coast of Australia, stretching from the Mary River in Bundaberg in the northeastern state of Queensland, right the way down as far as the southeastern state of Victoria. They typically spend most of their time in fresh water; commonly being found in dams, rivers, lakes, and estuaries.

While bass tends to sit quite deep in dams, lakes, and estuaries – often as deep as 30 meters (100 ft) below the surface, over the summer months they become very active during dawn and dusk, making them a lot of fun to chase through the warmer part of the year.

When it comes to catching Australian bass, they aren’t a picky fish, taking a wide range of surface lures such as poppers, frogs, cicada and walk-the-dog lures. Typically, a more favorable outcome is achieved by casting the lure towards shaded areas, under overhanging branches, near submerged timber or near rocks. Once the lure lands, let the ripples dissipate before beginning to work the lure back to you – this generally results in a better catch rate.

When it comes to fish that put up a good fight, the Australian bass is definitely batting out of its league, offering a great fight for its size and a fun challenge for both new and experienced fishers alike. Typically, the bass is caught from one of three locations: from land-based areas such as rocks and riverbanks, from the deck of a boat (in certain areas) and from the seat of a kayak, which is becoming a more popular way of late due to the ability to access otherwise inaccessible areas. 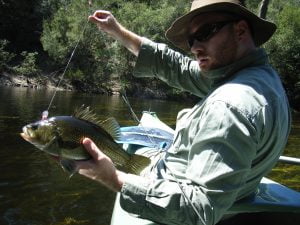 Now we’ve got an idea about the methods involved in catching bass in Australia and where they tend to hide out when keeping out of the sun, let’s take a look at six of the best spots to go fishing for these beautiful creatures:

Located between the towns of Childers and Bundaberg, this lake is popular with locals, but not too well known outside of that. As well as being a goldmine for bass, the lake is also a great spot to catch perch, catfish and sub-nosed garfish. Worth a trip if you’re in southern Queensland, but be aware that camping is prohibited in the area.

Lake Gregory is an easy side-trip from the Hervey Bay region which is where you will likely stay if visiting the World Heritage listed Fraser Island. It’s about an hour’s drive from the center of Hervey Bay.

The Pioneer River has a number of spots to stop and throw in a line as you head along the Mackay-Eungella Road including a few spots that remain pretty quiet to this day. Along with great rocky locations to lure out some decent sized bass, there are also great swimming spots too if you feel like cooling off on a warm summer’s day.

Marian is about 30 minutes drive inland from Mackay which many overseas visitors use as a stepping off point for tours of the Whitsunday islands. It’s not far off the main highway north to Airlie Beach which is another popular transit point for the Whitsundays/

This hidden freshwater oasis is located 80 km (50 miles) east of Armidale on the upper reaches of the Macleay River. Accessible via 4WD, George’s Junction is perfect for both kayak and land-based fishing, with the bass in the area known to be quite good fighters for their size. Keep this in mind when throwing in a line from a kayak as it’s a common sight to see fishermen separated from their kayaks by a particularly lively fish!

This location is more difficult to reach than the others recommended in this article, and will require some advance planning, there is a camping ground here as well as more upmarket accommodation at the Bass Lodge. The wilderness scenery around George’s Junction is astounding.

Lake Lyell is located about a two-hour drive inland from the state capital Sydney, however, it is well worth a trip if you are an avid fisher who loves chasing bass, brown trout or rainbow trout. It offers great opportunities for both boat and land-based fishermen to throw in a line, and although it’s more known for its big trout – 6 kg (13-14 lbs) isn’t uncommon – the lake attracts a growing number of bass fishermen over the summer months.

The lake is not far off the Great Western Highway, so it’s an easy drive through the spectacular scenery of the Blue Mountains. A 1-2-day fishing trip to Lake Lyell can be easily combined with any vacation itinerary involving arrival or departure by air through Sydney.

Less than two hours east of the state capital, Melbourne, this lake is turning into one of Australia’s bass fishing hot spots. As well as being a great place to find brown trout and Redfin, there is now plenty of bass in the lake thanks to a state government initiative that saw 81,000 fingerlings released into the lake, along with the introduction of a tagged bass challenge.

Using the M1 out of Melbourne, the trip can be undertaken in 90 mins. Alternatively, there is a route through the picturesque Yarra Valley that takes about an hour longer. A good option is to take one route one way and the other route going back. This is an easy option for a side-trip from a vacation itinerary that involves arrival or departure by air through Melbourne.

Fast catching up to Blue Rock Lake as one of Australia’s top bass spots, bigger bass of 35-40 cm (around 15 inches) in length are regularly pulled in here. Over the last couple of years, anglers have been impressed with the number of bass biting at Glenmaggie, with a few brown and rainbow trout also turning up.

Lake Glenmaggie is about an hour’s drive further east than Blue Rock Lake so a side-trip there will need to incorporate at least one overnight stay. There are several camping grounds and bed and breakfast places near the lake, and motel-type accommodation in nearby towns.

He loves to introduce himself as a passionate blogger. Apart from writing Chris loves new adventures, discover leisure trips around the world. And yes, fishing, boating, camping in disguise of traveling been his hobby along the decades.