Who doesn’t love to indulge in a film about their passion? Just as there are plenty of great movies about football and baseball, there are a number of great movies about fishing. The category can be fairly broad too depending on what is counted as a fishing movie. Shark movies are often counted as fishing movies, as are whale movies. But there are plenty of movies that focus on or feature recreational fishing, too.

Here are several of the best fishing movies of all time — with one great shark movie, of course:

This movie is largely considered to be the best fishing movie of all time, and it’s even frequently cited as one of the best movies in film history. It was the highest-grossing film ever made until the release of Star Wars two years later, and it’s one of the most successful franchises of all time. Jaws was also the first blockbuster film ever made, and Hollywood became obsessed with emulating its success. The movie’s success led Steven Spielberg to become a household name. He went on to produce a number of other blockbuster films like Raiders of the Lost Ark (1981), E.T. the Extra-Terrestrial (1982), and Jurassic Park (1993), among many others.

Jaws is about three men who head out to sea to catch a great white shark that has been terrorizing a summer resort town. The story resembles Moby Dick in many ways in the obsession with killing the shark, but it also focuses on how the task of fishing brings the men together. And for the 70s, the film boasts some incredible effects, such as those for the shark, which completely terrified audiences at that time. But don’t worry, the effects still hold up to this day — so if you want a thrilling fishing movie, you can’t do better than Jaws.

Based on the novel of the same name by Norman Maclean, the film follows the lives of two brothers in Montana during the Great Depression. The film is centered around their love of fly fishing, a love that they continue to share as their lives go in different directions. It also won an Academy Award for Best Cinematography and features some truly incredible shots of Montana’s beauty. 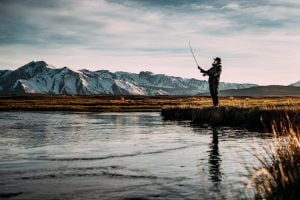 Directed and narrated by Robert Redford, A River Runs Through It is probably Redford’s most well-known directorial pursuit. Otherwise, two of his most famous movies include buddy movies he filmed with Paul Newman: Butch Cassidy and the Sundance Kid (1969), a widely-celebrated film about the adventures of two Wild West outlaws (largely considered to be one of the best films of all time), and The Sting (1973), another critically-acclaimed film about two skilled grifters hoping to pull off one last big con, which includes one of the most famous poker scenes in film history.

This film is an adaptation of the short novel of the same name by Ernest Hemingway (who approved of the film upon its release). It was directed by John Sturges, who’s perhaps best known for directing The Magnificent Seven (1960) and The Great Escape (1963), and stars Spencer Tracey, who was nominated for an Academy Award for his performance in the film. Some of Tracey’s other well-known films include Adam’s Rib (1949), Father of the Bride (1950), and Guess Who’s Coming to Dinner (1967).

The Old Man and the Sea focuses on an old fisherman who has gone several months without catching a single thing. But he refuses to give up, and the film shows his struggle with the task. More so than the other movies on this list (which focus on fishing as an occasion for bonding), this film is about fishing as a solitary activity. Still, there is bonding in the film — the old man befriends a teenager who follows him out of curiosity (because his parents told him not to go near the old man). Want to know if the old man catches a fish in the end? You’ll just have to watch it to find out.

Tariff Toolkit to Keep You Informed on U.S.–China Trade Changes

How to Protect Your Hearing While Fishing

Fishing on a Minnesota River