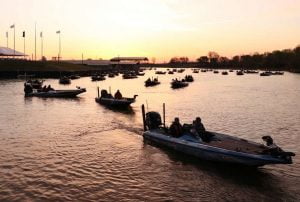 BIRMINGHAM, Ala. — The excitement of sportfishing kicks off again in June with seven tournaments remaining in the hotly contested Basspro.com Bassmaster Opens Series. With fan interest at an all-time high and a stacked field of anglers that includes some of the sport’s biggest names, B.A.S.S. officials announced plans today to expand live coverage and make it easier for additional pro anglers to compete in the Opens.

“Our anglers, fans and sponsors are excited to get back to the fun and excitement of tournament fishing when the season resumes this summer,” said B.A.S.S. CEO Bruce Akin. “The 2020 Bassmaster Opens has set up to be among the most competitive in history, and we were thrilled to get the season rescheduled.

“While it was disappointing to postpone events, our team worked diligently during the unexpected downtime to improve Opens Series coverage options and implement additional technology that fans and anglers alike are sure to love. Now we just have to wait and see what these talented anglers catch!”

Over the course of January’s Bassmaster Eastern Open at Harris Chain, the leaderboard was visited an astounding 392,000 times as fans tuned in to follow the progress of their favorite anglers! Now, fishing fans will have two new options for following the on-the-water action. Beginning June 18 with the Basspro.com Bassmaster Central Open at Arkansas River, both boaters and co-anglers will use BASSTrakk for real-time updates. Plus, fans can follow the final-day drama by streaming Nationwide Bassmaster Opens LIVE presented by Grizzly as camera boats provide coverage of the leaders.

But it is not just fans who will have more access to on-the-water action. More anglers will also have an opportunity to compete for the coveted Falcon Rods Angler of the Year title!

While Opens tournaments have traditionally seen a pro angler and co-angler competing from the same boat, new rules going into place when the season restarts on the Arkansas River in June will allow for some pros to compete without a co-angler on one of the first two full-field days of the tournament on a random basis. Those pro anglers currently on the waiting list for tournaments will be added to the field. Registration for the first Bassmaster Central Open on the Arkansas River has been extended through May 29, 2020 and all late fees will be waived. Registration information can be found at Bassmaster.com/Opens.

“In these unprecedented times, it’s understandable that fewer co-anglers may want to commit to a tournament and be in close proximity to others,” said Chris Bowes, Tournament Director for the Opens Series. “But we wanted to ensure that pro anglers still have an opportunity to compete and collect valuable points toward the Falcon Rods Angler of the Year race as well as qualify for a spot on the Elite Series.”

The 2020 Basspro.com Bassmaster Opens features four events in two divisions — Eastern and Central — with the winners of each event earning an automatic berth into the 2021 Bassmaster Classic, provided he or she has fished all four events in that division. The Top 4 anglers from each division’s final points standings will receive an invitation to fish the 2021 Bassmaster Elite Series. As a new addition, Elite Series invitations will also be extended to the Top 4 anglers from the cumulative standings for both divisions for a total of 12 invitations.

Among those fighting for those coveted Elite Series invitations are 46 anglers who have registered to fish all eight Opens Series tournaments plus two current Elite pros, Brandon Palaniuk and Gerald Swindle, who are fishing the entire season to help ensure they requalify for the Series.

Be Responsible this Memorial Day Weekend and This Summer

Hank Cherry Wins Back to Back Bassmaster Classics