GUNTERSVILLE, Ala. — Just days before the world’s best anglers take to the water to compete in the 2020 Academy Sports + Outdoors Bassmaster Classic presented by Huk, volunteers spread out along the shores of Lake Guntersville to ensure the area is Classic ready as part of the Bassmaster Classic Clean-Up Challenge sponsored by AFTCO, Huk, TVA and Yamaha.

Conservation efforts are a cornerstone of the B.A.S.S. tradition, and leading efforts to collect litter can have a sizable impact on the waterways the organization and its fans frequent.

“B.A.S.S. was founded on three things: tournament fishing competition, youth participation and conservation,” B.A.S.S. Conservation Director Gene Gilliland said. “(B.A.S.S. Founder) Ray Scott used to always talk about the three-legged stool. This is one of the legs, and it doesn’t get talked about a lot.” 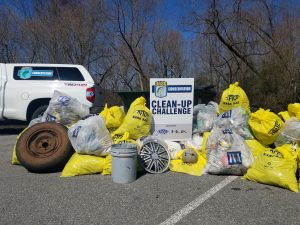 Bags of plastic bottles, cans, paper and plastic trash, tires, styrofoam, a Barbie doll and even a bowling ball were collected in the clean-up effort.

“One of the things that we want to try to do is to improve the resource anytime we have a chance,” Gilliland said. “An event like this builds camaraderie between those participating. It builds goodwill with the communities that host our events.

“Most importantly, it helps us leave the venue better than we found it.”

The next B.A.S.S. Nation Clean-Up Challenge is scheduled for March 21 at Chickamauga Lake in Dayton, Tenn.

The latest information on B.A.S.S. conservation efforts can be found on their group Facebook page or at Bassmaster.com.

Green and Bradley Bests 200 Boat Field Even With Boat Trouble