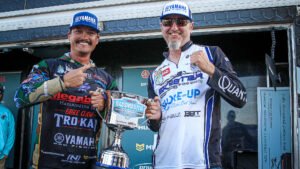 After placing third on Day 1 with 14-10, Zaldain and Rickard held that spot on Day 2 but saw the effects of a minor front dwindle their productivity to 11-5. Championship Sunday served up nearly perfect conditions — light south wind, warm and calm — and the anglers put on a bona fide shallow-water redfish clinic that yielded their best bag of the event — 17-5.

Zaldain and Rickard’s final-round catch was the day’s second largest, behind the second-place team of Bassmaster Elite Derek Hudnall of Baton Rouge, La., and IFA Redfish Tour veteran Ron Hueston of Naples, Fla., who caught the event’s heaviest limit — 18-3. Edging Hudnall and Hueston by a margin of 2-12, Zaldain and Rickard won $50,000.

“We figured out a pattern really late on our last day of pre-fishing,” Rickard said. “We had to stick with it for three days. Yesterday it bit us a little bit, but it panned out today.”

“I’ve been bumped so many times,” said a visibly emotional Rickard. “I can’t even express the emotion that I feel — it doesn’t seem real. But today on the boat, Chris said ‘Whenever it happens, something special happens.

“Well, I’ll tell you, today was something special on the bite. I’ve never had a final day like today was.”

Recognizing that Day 2 saw the front’s strong north wind and high pressure suppress their area’s potential, the champions decided to go all in for the final round. This was a prudent decision, as Saturday’s quiet, lifeless complexion starkly contrasted Sunday’s immediate vibrancy.

“I think we caught like 40 fish today — unreal,” Zaldain said. “The signs weren’t right yesterday and we only caught two fish. Today, we go into our area and Ryan said ‘Dude, look at all the mullet (a known redfish indicator) on the horizon.’

“There were mullet jumping and baitfish everywhere. Things started happening and we went through one fish after another. I think we released like 10 7-pounders and four 8s.”

Zaldain and Rickard caught all of their fish on a shallow Laguna Madre flat on the east side of Padre Island, south of the Highway 358 Bridge. As Zaldain explained, they targeted three main areas with sand depressions dropping to about 2 1/2 feet.

“The redfish were feeding on the shallow flats and then they’d drop into these sandy holes,” Zaldain said. “We would drift up to each of these areas and make bomb casts until we hooked a fish, then we would Power-Pole down and fan cast the area.”

Of the six fish they weighed this week, Rickard and Zaldain each caught three. The anglers fished weedless gold spoons and 4-inch Strike First paddle tails on belly-weighted hooks.

“These baits imitated the mullet that these redfish were eating,” said Rickard, who doctored his baits with baitfish-scented Pro-Cure Super Gel.

The paddle tails produced both of their final-round fish, but Zaldain also dipped into his Elite Series repertoire and caught several big fish on a 6-inch Megabass Magdraft swimbait.

“He loved saltwater fishing, too,” Zaldain said. “So, Aaron, this is for you!”

Hudnall and Hueston struggled on Day 1 and placed eighth with 8-6. Rebounding on Day 2, they added 13-15 and rose to sixth before racing into a second-place finish with a dominant final-round performance that tallied 40-8 and earned them a pair of 36-volt Lithium Pro Powerpack batteries valued at $4,200.

“The key was that Missile Baits Shockwave; it was something I could make long casts with,” Hudnall said. “Those fish were feeding on little baitfish that were the same size as that ChatterBait with that Shockwave.”

Day 2 leaders Travis Land of Seguin, Texas, and Nicky Savoie of Cutoff, La., who represented the Elite Redfish Tour, placed third with 40-4. On Day 1, they placed fourth with 13-3, then added 14-8 to take over the top spot. In the final round, they caught a pair of reds that weighed 12-9.

Returning to the same marshy area of Mesquite Bay on the east side of Matagorda Island, Land and Savoie tried sight fishing the shallow flat that produced for them on Saturday. Land said the day’s lighter winds and lower water kept the fish from aggressively feeding in this area and they were unable to put together any substantial back-up plan.

“It’s a humbling sport; you work your tail off, fish hard, the fish are there one day, gone another,” Savoie said. “Their (Zaldain and Rickard) fish showed up today, ours left.

“We had 10 pounds all day and caught our last two fish in the last hour to upgrade.”

The 2021 Yamaha Bassmaster Redfish Cup Championship presented by Skeeter is being hosted by the Port Aransas Tourism Bureau & Chamber of Commerce.