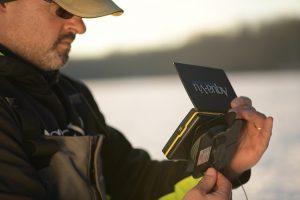 Crosslake, MN (October 17, 2018) – Innovation is a good word. It’s an important word, and an even more important concept, because it refers to the creation and implementation of a truly original idea. In its purest form, innovation breeds a new endeavor made possible by a unique device. Example? Sky diving isn’t quite sky diving without Sebastien Lenormand’s invention of the parachute.

Prior to the invention of an Aqua-Vu, spying beneath the water’s surface could only be accomplished via scuba tank or submarine—two devices most anglers aren’t likely to own. In the two-plus decades since originating the fascinating fish-finding method known as underwater viewing, Aqua-Vu has earned at least a dozen design patents, initiating and owning every advancement in underwater optics technology.

“The reel is the deal,” laughs Brian “Bro” Brosdahl, legendary fishing guide and professional angler. “For years, underwater viewing meant extra camera cable lying on the boat floor or on the ice. The micro Revolution makes this a non-issue; the reel saves so much time and energy by instantly paying out and retrieving camera cable— even in deep water.”

Brosdahl calls the micro Revolution camera “an absolute game-changer for finding fish, ice or openwater. It’s one of my favorite new tools of the year.”

“Panfish” Phil Laube, another exceptional angler and longtime Aqua-Vu user says the new hand-held units have transformed his ice fishing. “I have so much fun just hopping from hole to hole now, quickly spying on fish, because of the convenience of the camera reel,” says Laube, who relies on an Aqua-Vu to find big fish on new bodies of water. “The micro Revolution lets me instantly drop the lens into 10, 20, or 30 feet of water, and retrieve it just as fast.”

The time-saving difference, Laube says, translates to more fish and more fishing hotspots found in less time. “I’m learning things so much faster than what’s possible with sonar. In 20 feet of water, a sonar unit with a standard 20-degree cone angle only gives you a 7-foot-wide circle of bottom coverage. But the camera can show a much broader perspective—especially in clear water or with the IR lights turned on—and of course, everything I see is live, dynamic and real.

“It does other things sonar can’t, like confirm fish species and size, type of vegetation, and exactly where fish lie relative to your position. All this real-life data gives me immediate confidence when I drop of a lure down the hole.

“Sonar’s a great tool when you’re fishing. But for fish finding, the micro Revolution has become the go-to technology. And if I want to sight-fish, the camera works awesome for that, too.”

Laube offers one other intriguing tip for finding fish with the Aqua-Vu. “I get people asking whether or not the camera spooks fish. It’s funny, but lots of times it’s just the opposite.

“If I drop down and see the right habitat—a nice stand of aquatic vegetation, boulders or just baitfish—I keep the camera down there for a minute or two, and wait. I’m telling you, the camera housing itself can be a major fish attractor. Fish like pike, bluegills, perch, bass and even walleyes detect its underwater signature and often swim right over to investigate. You ultimately end up seeing fish on spots you wouldn’t otherwise know were there. That’s a pretty cool benefit, and one most folks don’t even consider.”

While official patents and behind-the-scenes engineering don’t mean much to anglers, the end results speak for themselves. “What’s cool,” Laube adds, “is that when I’m done, I reel up the camera, and slip the whole unit into my coat pocket and start catching fish.”

Available in retail stores nationwide, purchase of the micro 5.0 Revolution (MSRP $349.99) and micro 5.0 Revolution Pro (MSRP $449.99) qualify for a free Pro-Viewing Case/Car Charger Accessory Pack ($60 value.) Both underwater camera systems also include an internal rechargeable lithium-ion battery for up to 8-hours of continuous use and a battery charger. For more information, visit www.aquavu.com.

Check out the SUPERNATO BEETLE from Molix

A New Way to Mount Your Tranducer