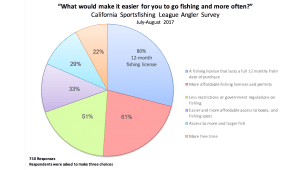 The California Sportfishing League (CSL), an advocate for making recreational fishing more accessible and affordable, released the results of an online survey that sought to determine why fishing participation rates in California have been experiencing a significant decline along with license sales.

According to a 2015 CSL study, since 1980, annual fishing license sales decreased over 56% in California, while the state’s population increased over 60% during the same time period. And despite having one of the nation’s longest coastlines and thousands of rivers and lakes, the U.S. Census reports that only 4.3% of California adults fish, which ranks dead last per capita among all 50 states.

“California’s costly and antiquated fishing license program, and government imposed regulations and restrictions on manner of take are contributing factors to an alarming decline in fishing participation rates,” said Marko Mlikotin, executive director of the CSL. “When California’s economy and jobs are threatened by a fishing license system that consumers find too costly for its limited value, reforms are desperately needed to attract more outdoor enthusiasts to the joy of fishing.”

During a four-week period, 750 California anglers participated in an online survey to determine why anglers are no longer fishing, or not as often.

When asked: “What would make it easier for you to go fishing and more often?”

The results of the survey will be shared with members of the California State Legislature and state policy makers to bring about policy changes that can stimulate greater participation and economic activity.

Senate Bill 187 authored by Senator Tom Berryhill, and sponsored by the CSL passed the State Senate unanimously and is pending on the State Assembly Appropriations Committee suspense calendar.