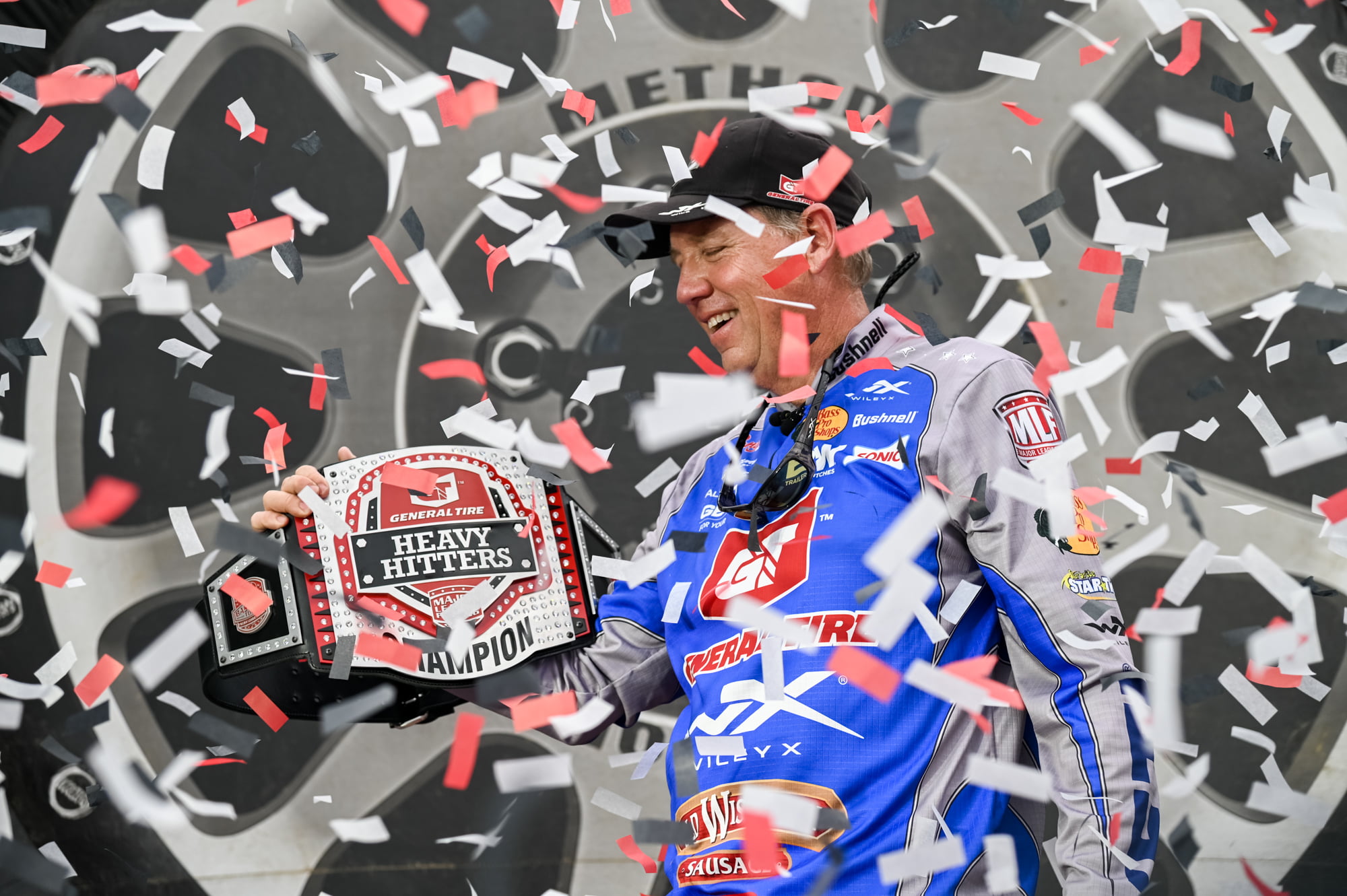 RALEIGH, N.C. (April 14, 2021) – It was a sight-fishing clinic on Shearon Harris Reservoir in Raleigh on Wednesday, and pro Alton Jones of Woodway, Texas, was the professor. The Texas angler boated 12 bass weighing 45 pounds, 9 ounces to dominate the final-day Championship Round and win the top prize of $100,000 at the Major League Fishing (MLF) General Tire Heavy Hitters Presented by Bass Pro Shops in North Carolina. Jones won by a 15-pound, 5-ounce margin over pro Jeff Sprague of Point, Texas, who caught eight bass totaling 30-4. Sprague, however, was not disappointed in his finish as he earned the top Big Bass Bonus of $100,000 with a 5-pound, 3-ounce largemouth.

Just 23 minutes into Period 2, Jones caught a 3-pound, 3-ounce bass to move into the top position on the leaderboard and he never relinquished it. The tall Texan showed MLF NOW! viewers why he has long been considered one of the top sight-fishing anglers in the game.

“This feels so, so good. It’s been a while since I’ve won a Tour-level event like this, and it was a very special day,” said an emotional Jones when he came off of the water. “After my practice time, I knew that I had found several key areas that had the potential to be really special for this event, if I could just make the final rounds.

“When we did our morning ride-through this morning and I got on the trolling motor, I found about 10 3-pounders in my first pass through the cove, and I thought to myself, ‘you know what, this could actually happen.’ I didn’t know if they were going to bite, but if they did I was going to have a chance. And sure enough, here I am. I still can’t believe that I’m the Heavy Hitters Champion.”

Jones saw the majority of the fish that he caught on Wednesday on beds, and managed to boat a dozen keepers flipping an “old-school” Texas-rigged Canyon Plastics Gitzit tube (green-pumpkin with purple and black metal flake).

“I really like throwing a tube during the spawn – it’s a bait that will catch a 2-pounder, a 3-pounder, but it will also catch a 10-pounder,” Jones said. “So, it’s good bait to fish for numbers and size. My Kistler rods were also very important – I used a Kistler Z Bone. That rod is super-light, super-sensitive, and super-strong and helped me out a lot today.”

Jones also shared some of his sight-fishing prowess with the crowd gathered at the takeout ramp.

“Every fish that I caught today was an individual,” Jones said. “I had to figure out what each fish was doing, and how to work that particular fish. That’s one of the things that I love about sight fishing – you treat every fish as an individual. What makes one fish hot, the other fish will ignore. So, it’s kind of a thinking man’s game. It’s a stealthy game, because you can see them, but they can also see you. I try to hide from the fish, and I’ve got a few other little tricks that I like to pull and today, it all worked out for me.”

Second-place angler Jeff Sprague was also emotional and exhausted after a long week of competition.

“I scratched by every day this week,” Sprague said. “The first day at Lake Jordan was great – I caught so many fish and had a phenomenal day. The second day, we literally scratched by and barely made it into the Knockout Round. Then, in the Knockout Round, to tie for the last position in and to get through via a tiebreaker. And now, on Championship Day, to catch the big bass and win 100 grand and finish second overall, this has just been a stellar week.”

Overall, there were 57 bass weighing 211 pounds, 10 ounces, caught by the final 10 pros on Wednesday, which included two 5-pounders, 13 4-pounders, and 42 3-pounders caught from Shearon Harris Reservoir.

Television coverage of the General Tire Heavy Hitters Presented by Bass Pro Shops will be showcased across six two-hour episodes, premiering at 7 a.m. ET, July 17 on the Discovery Channel. A one-hour special episode of MLF Inside Heavy Hitters will also air on CBS in late 2021. New MLF episodes premiere each Saturday morning on the Discovery Channel, with additional re-airings on the Outdoor Channel and the Sportsman Channel. Each two-hour long reality-based episode goes in-depth to break down each day of competition.

Founded in 2011, Major League Fishing (MLF) brings the high-intensity sport of competitive bass fishing into America’s living rooms on Outdoor Channel, Discovery, CBS, CBS Sports Network, World Fishing Network, Sportsman Channel, and on-demand on MyOutdoorTV (MOTV). According to Nielsen ratings, Major League Fishing remains the number one series on Outdoor Channel for five years and MLF premiered as the number one outdoor show in their time slot on Discovery in 2019.